Did you know that ginger packs a lot of nutritional punch and is one of the healthiest spices out there? This post lists 12 awesome benefits of ginger and explains why this ancient spice is a superfood you’ll want to include in your diet. 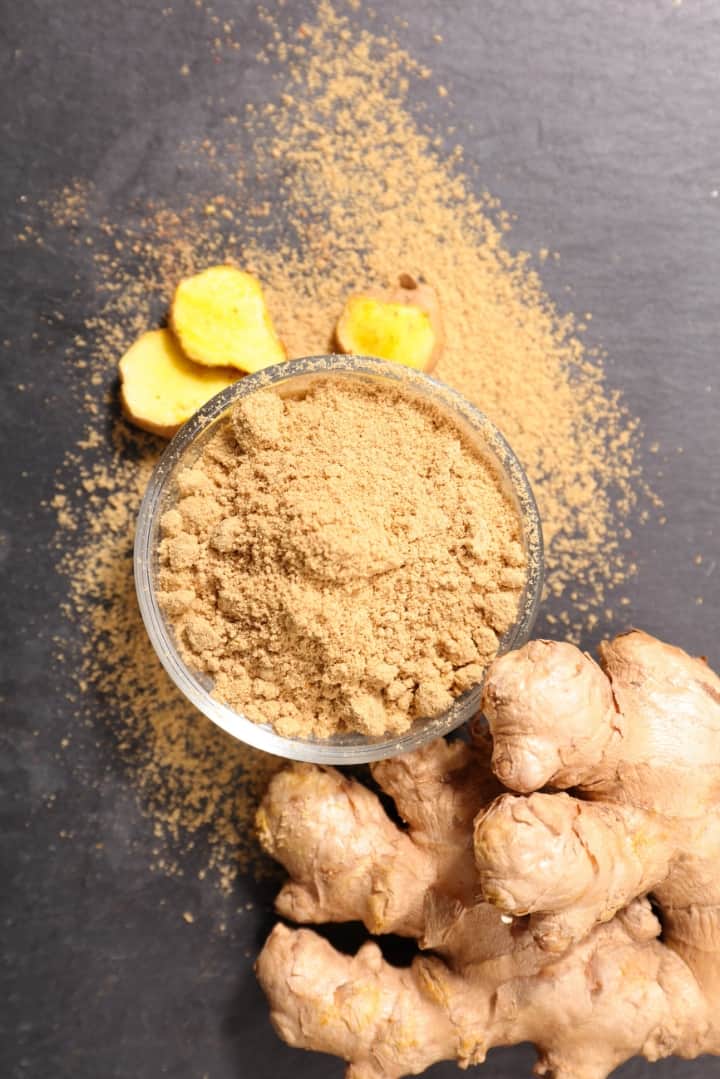 Ginger is a spice that gives a great zing to foods. It’s spicy, pungent, and can be described as almost peppery.

I love the flavor of ginger. You can use it in so many ways. I have a few go-to recipes that I include it in, like ginger tea, healthy teriyaki sauce, and of course, my favorite ginger cookies.

Not only can we cook with ginger or drink ginger in tea, but it can also be taken in supplemental form.

Some of you may not know that. So I’d thought we’d take a look at the benefits of ginger. You’ll be surprised at what adding this ancient spice to your diet can do for you.

It’s kind of like turmeric. When I wrote the post on the amazing benefits of turmeric, I learned that it can do a lot of things for you, such as help depression and fight diseases like Alzheimer’s.

Turns out that ginger has fantastic health properties, too. Let’s take a look! 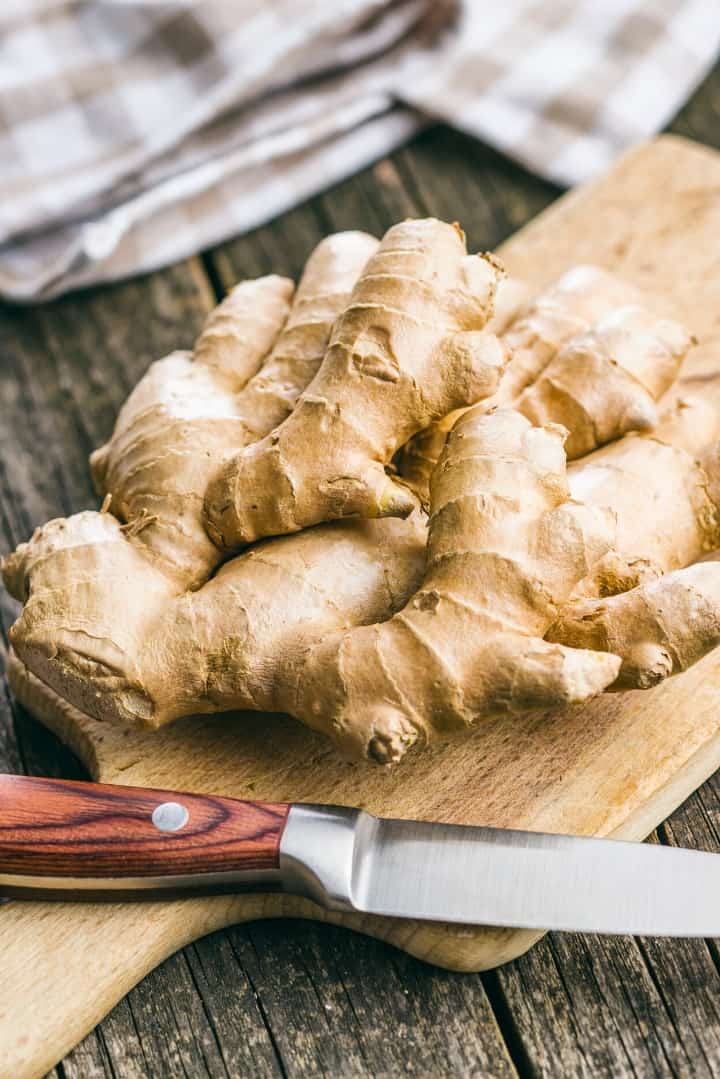 Ginger comes from same plant family as turmeric and cardamom. The main portion of ginger that we eat comes from the rhizome. That is the section that we eat as a spice. It’s definitely an ancient spice and dates back over 5000 years. It was used as a flavoring but also as a medicinal aid. Ginger was valued in ancient trade for these reasons, and at times was a precious spice.

We see ginger in many forms. You’ve got candied, fresh, ground, pickled, and more. It’s a versatile spice used in teas, baking, in syrups, and in recipes for curries and sauces.

WHICH IS BETTER, DRIED OR FRESH GINGER?

I wouldn’t really say one is better over the other. Fresh ginger has gingerols in more concentration, but shogaols are found in higher abundance in the dried product. Gingerols are the most well-studied of the compounds in ginger. No matter what, it’s worth it to add ginger to your diet in any form. Try adding ginger to your daily smoothie, to muffins, and to marinades.

There are supplements containing ginger as well. However, any supplementation should be approved by your doctor, just to rule out contraindications with medication you may be on. It’s best to let your doctor know, in case you have health conditions that may be affected by ginger. In general, it’s safe, but it’s never wise to take supplements without your doctor’s okay.

DOES GINGER HAVE SIDE-EFFECTS?

If you are drinking ginger, you may have heartburn or an upset stomach, but this is most likely if you are drinking tea in excess. Using ginger often in recipes does not typically cause any issues unless you are allergic to it. The highest recommended intake of ginger per day is 4 grams. If you consume more, you may have nausea, heartburn, and irritation of the mouth. So, stick to a little bit in your tea and use it in recipes at will. That’s your best bet. 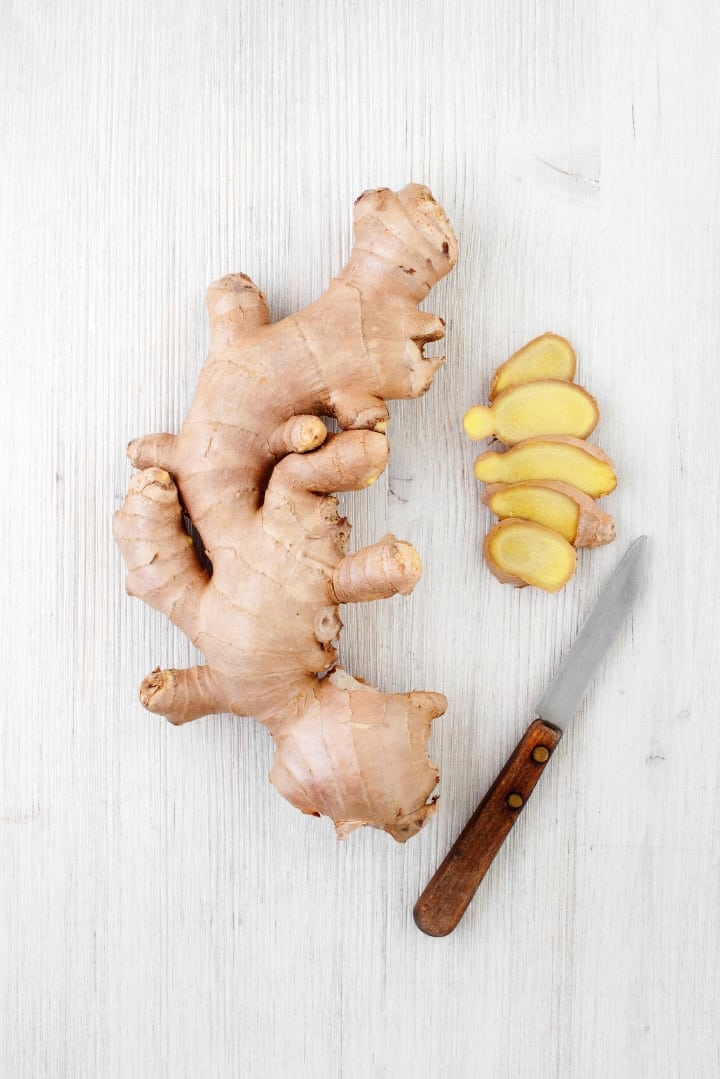 HOW TO STORE FRESH GINGER

Fresh ginger stays firm in the fridge for about a month. When purchasing, look for a firm, smooth root. It should feel somewhat heavy. To store, place unpeeled ginger in a resealable bag. Push the air out of the bag before closing, and place the bag in the crisper. If the ginger has been cut to use, store the remainder in the same way, but blot the cut end dry with a paper towel before sealing the bag.

If you peel and grate the ginger, you can freeze it in teaspoon-sized portions in an airtight container for up to 6 months. For baked goods and raw dressings, thaw the ginger before using. If you are making a smoothie or stovetop recipe, toss the frozen ginger right in!

The 6-shogaol we discussed that is found in ginger may help against neurodegenerative diseases. This particular study mentions Alzheimer’s disease as one of interest. It’s inflammation in the brain that can cause problems with day to day functioning and memory, as well as age-related issues.

We mentioned gingerol as an important component of ginger. This is where the infection protection comes in. Like garlic, ginger is effective because of its antibacterial properties. That’s another good reason to add some ginger zing to your dishes!

Studies show that ginger may contain an enzyme that lowers cholesterol in the body. How does this work? The enzyme potentially increases how we use up the cholesterol so that it does not hang around in the body and build up.

A controlled study showed that pregnant women who took Vitamin B6 along with quantities of ginger in capsule form saw great improvement in their symptoms. Pregnant women should speak to their doctor about this possibility before taking ginger on their own.

5. GINGER CAN HELP SYMPTOMS OF OSTEOARTHRITIS

Another fabulous find when it comes to ginger is that it may help relieve various forms of rheumatoid diseases, including osteoarthritis. A study was performed using ginger extract. Although some subjects had mild gastrointestinal discomfort, the study determined that the ginger helped reduce the symptoms of the arthritis of the knee.

6. GINGER CAN HELP WITH MUSCLE SORENESS

A trial held with athletic participants concluded that 3 grams of ginger daily over 6 weeks provided relief from muscle soreness. The anti-inflammatory properties were said to play a part, along with the effects of the gingerols, shogaols, parasols, and zingerones, among others. The female athletes took the ginger in powdered form. 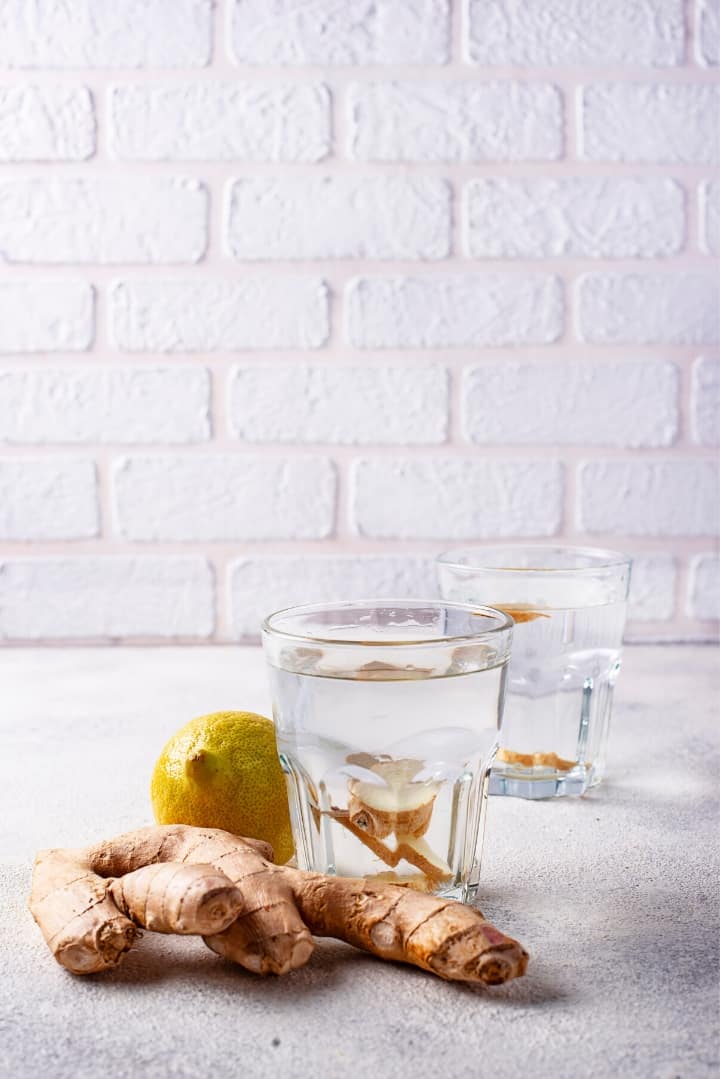 7. GINGER HAS ANTIOXIDANTS AND ANTI-INFLAMMATORY PROPERTIES

Ginger root is high in antioxidants and is also a known anti-inflammatory spice. It’s the gingerols in the rhizome that have the highest strength of medicinal properties. That’s why ginger has had so many uses over thousands of years. Anti-inflammatory foods are great for making you feel better all-around. Just take a look at my post on Top Anti-Inflammatory Foods .

Participants in a study who took 3 grams of ginger a day (in capsule form and over 3 periods during the day) showed a decrease in markers for cholesterol. High cholesterol can cause a few health problems, especially clogged arteries.

Ginger, taken in 5g supplements under a controlled study, showed significant promise against cardiovascular disease. Ginger was indicated to have anti-platelet properties, meaning that it helped against blood clotting together.

Ginger is helpful to the digestive process. It helps break up intestinal gases and speeds up the motility of the digestive system. In other words, eating ginger helps your stomach to work as it should, moving food along, making you feel great. 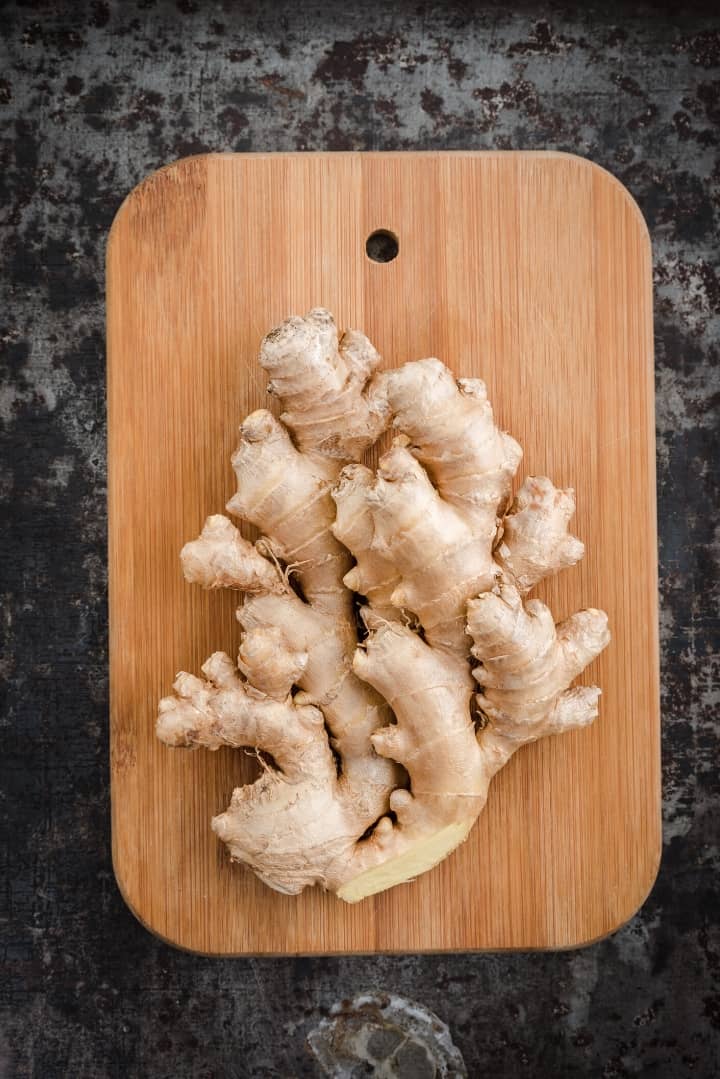 Not everyone responds to NSAIDs when trying to combat menstrual pain. Clinical trials have shown positive effects against period pain when ginger was taken. So much so, that its effects were as good as pain relievers.

12. GINGER MAY HAVE ANTI-CANCER PROPERTIES

Along with lifestyle changes like eating lots of fruits and vegetables, consuming whole grains, partaking in exercise, and more, evidence shows that ginger may have a positive effect against gastrointestinal cancers. Not only that, it may suppress cancer growth in relation to the skin, breast, ovaries, colon, brain, and more.

I find there is never too much information out there about how to be healthy and at your best. I bet these posts will get you that much closer!

One thought on “Is Ginger Anti-Inflammatory? + 11 Amazing Health Benefits of Ginger”

link to Do ACV Gummies Work?

Not everyone likes the taste of apple cider vinegar and may decide to try gummies. But do ACV gummies work just as good as ACV? In this post, I’ll explain why it’s best to take liquid apple cider...

Continue Reading
link to Which is Better: Protein Shake Before Or After Your Workout?

I get asked a lot about the best timing for when to have a protein shake - before or after your workout.  So, in this post, we’ll dive into what the research says, and I’ll share what I do...