This coconut oil pie crust can easily be doubled to make two pie crusts for pies with a top and bottom and it’s perfect for anything from pumpkin pie to cherry pie! Plus, it’s dairy free, vegan, and easy to make. 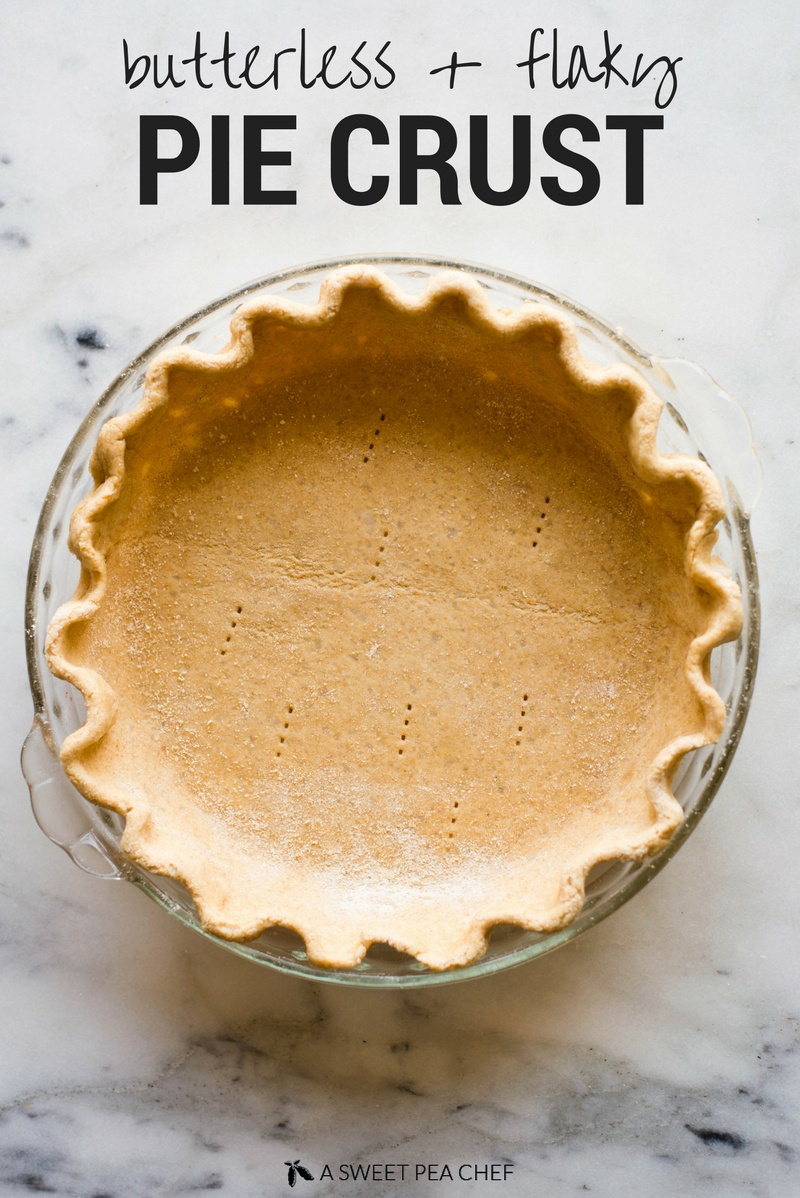 A few years ago, I tested this clean pie crust recipe out for Thanksgiving and I never looked back ever since.

And it’s time to tell you everything about it.

If you’re sad that you have to pass on the pie this Thanksgiving or you are looking for healthy pie crust alternatives, you can be happy because this pie crust is healthy, clean, and free of refined ingredients. It’s also a dairy free pie crust. Actually, it’s not only dairy free, but also a vegan pie crust. Woot.

Yes, this is time to rejoice

And eat pie! What kind of pie? ALL kinds of pie!

I’ve used this no butter pie crust for pecan pie, pumpkin pie, and sweet potato pie so far (numerous times, let me tell you) and it’s always a delicious, flaky, and flavorful crust.

My kids even eat the crust more than the filling in their pies!  I mean…  Right?

You can easily double this easy pie crust recipe to make a bottom crust and a top crust or make it as is for just the bottom crust. Or to refrigerate it or freeze it for later.

So…what I’m saying here is… imagine any pie — any pie at all — and know now that you can make a clean crust for it.

And that’s not even getting to pot pies, people.

Things are looking up!

And pssst!  Stay tuned for some healthy pie recipes at the end of this post. 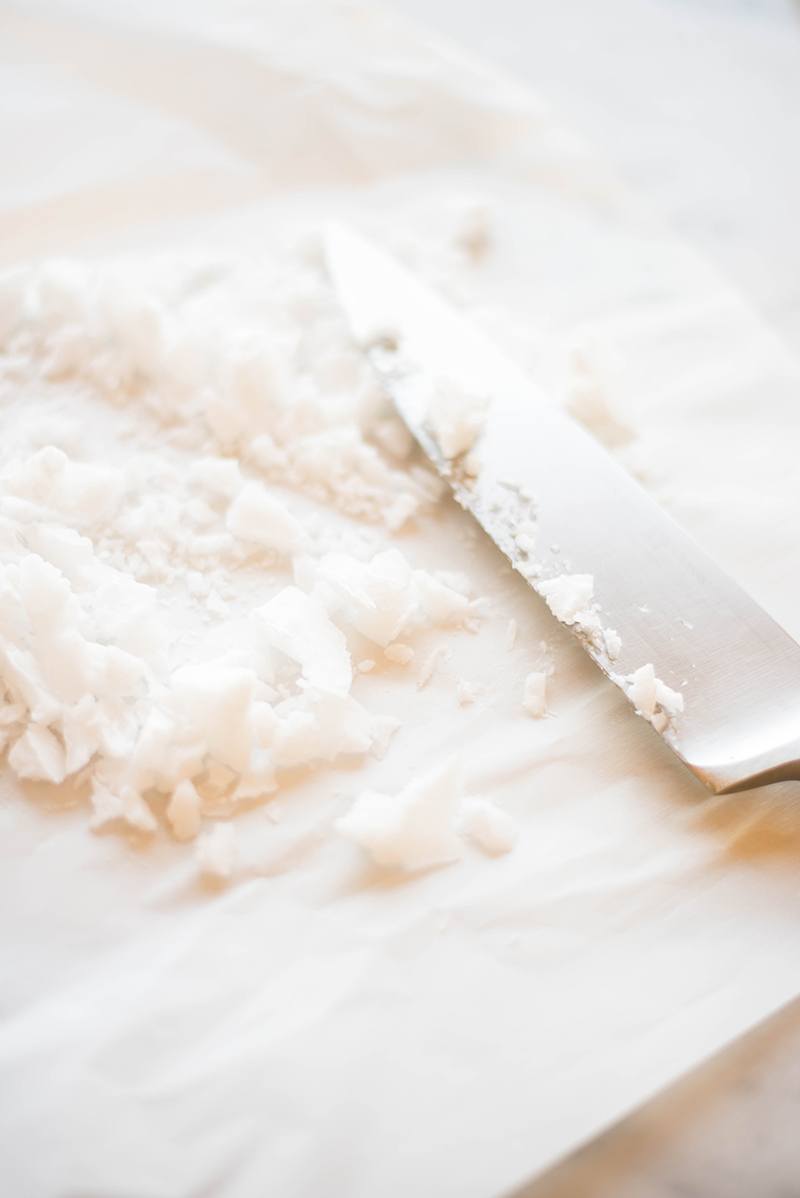 HOW TO MAKE HEALTHY PIE CRUST

So, let’s go over the reasons why this pie crust without butter is a better option for you, shall we?

BTW I’ve also used spelt flour for this pie crust which worked nicely, but there’s something really great about the whole wheat pastry flour.  It doesn’t have that heavy “whole wheat” flavor you think of when you hear whole wheat, but it bakes like a normal flour you’re probably used to, but without the refined stuff.  You could also use an almond flour for a paleo option. 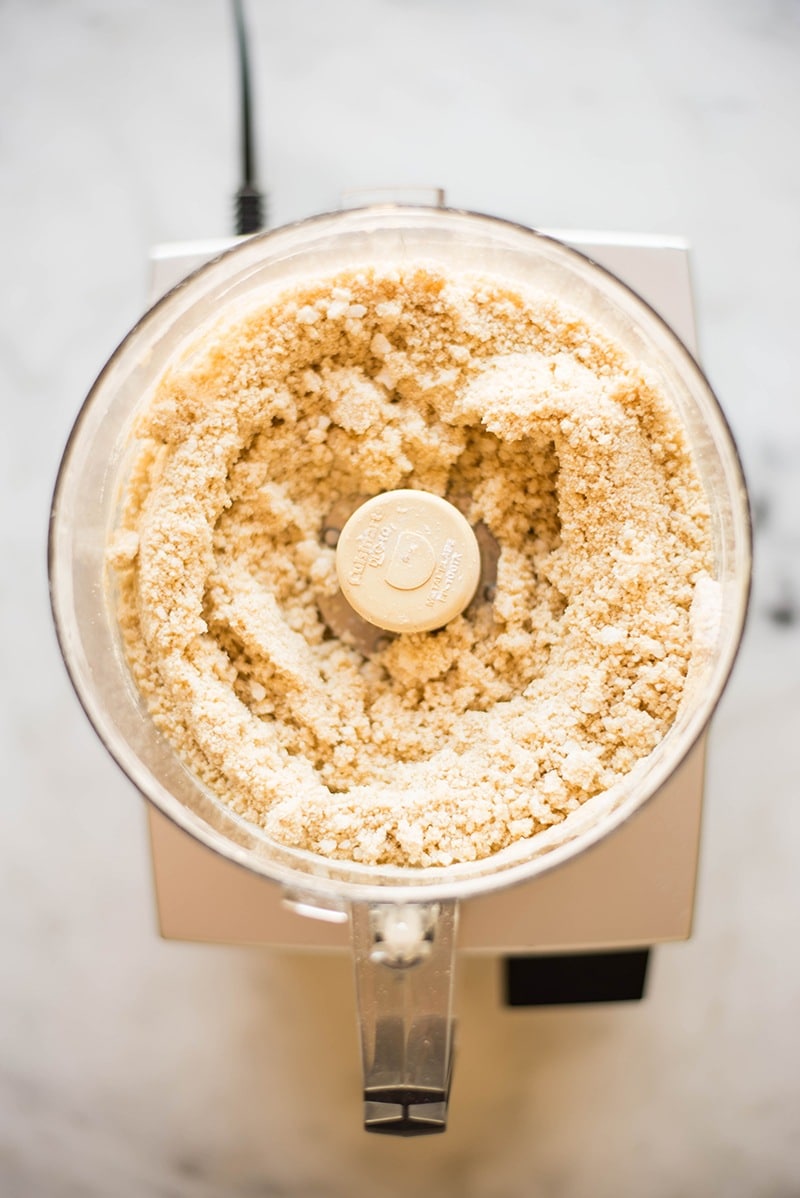 Now, I know there are some of you who refuse coconut oil because you or a loved one hates the smell and flavor of coconut.  If this is the case and you’re worried about the coconut flavor coming through, look for “unrefined, virgin coconut oil” as that has the least heat involved in the processing so it has the least strong flavor.

And you get a vegan pie crust that is actually good for you.

I really think you should try it because coconut oil makes a healthier pie crust that tastes very good, in my opinion.

But, to be fair, I heart coconut oil.

Guys, I’m like seriously in love with coconut oil – it can work MAGIC in foods like cheesecake and dark chocolate peanut butter cups.  And PIES!  So amazeballs.

MAGIC, I TELL YOU!

IS COCONUT OIL GOOD FOR YOU?

The “is coconut oil good for you?” controversy seems to be a pretty heated debate these days.  It’s like the new eggs.

Why? Because coconut oil is high in fat. However, plant-based fats, like coconut oil, contain other substances that are good for you. Like antioxidants.

And, as long as you don’t use coconut oil in every single meal you’re making, coconut oil is actually very good for you. 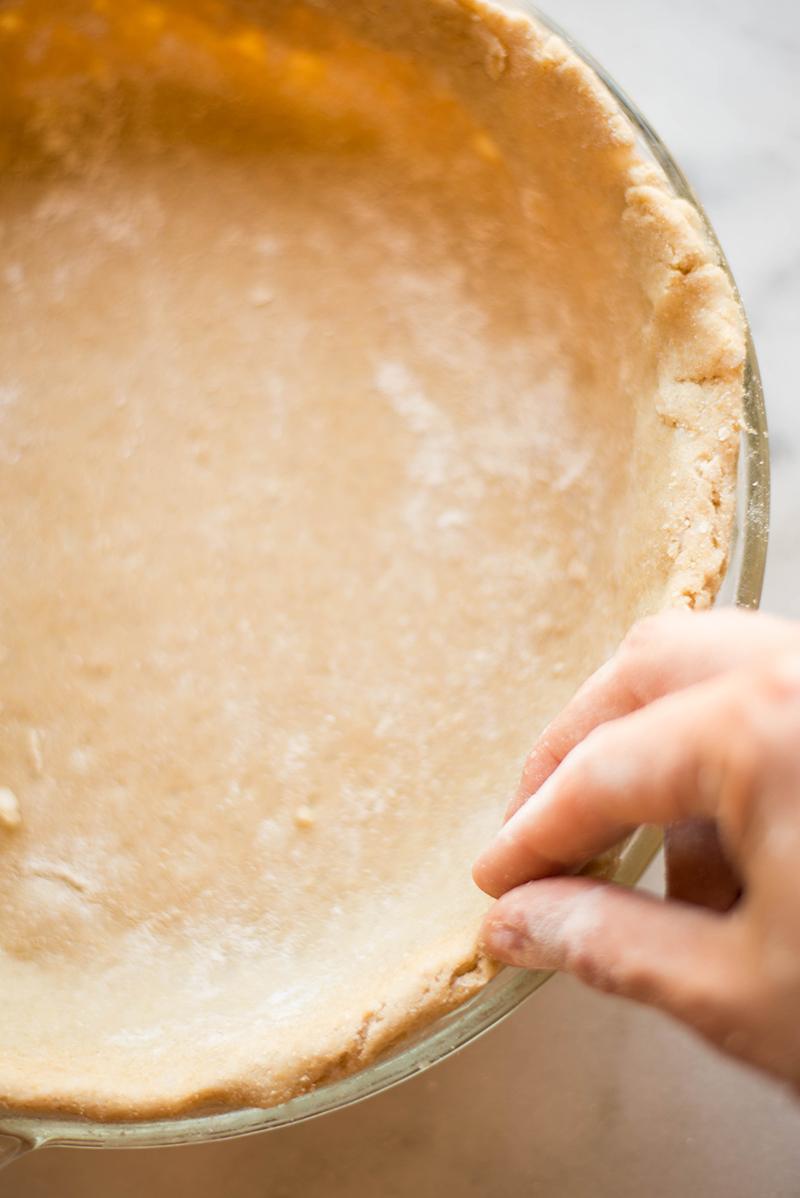 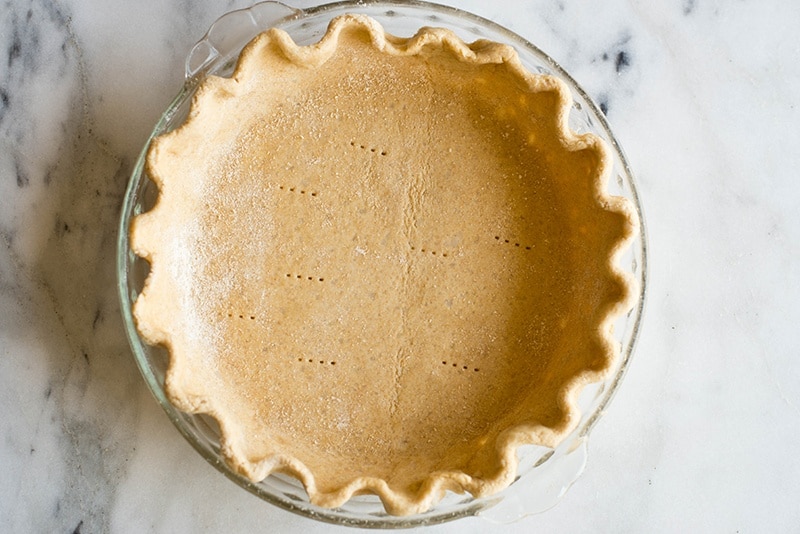 I already told you about the virgin coconut oil you can use if you don’t like the flavor of regular coconut oil. If that’s still not good enough for you, there are other healthy butter alternatives you can try to make this easy flaky pie crust.

You can substitute butter for: 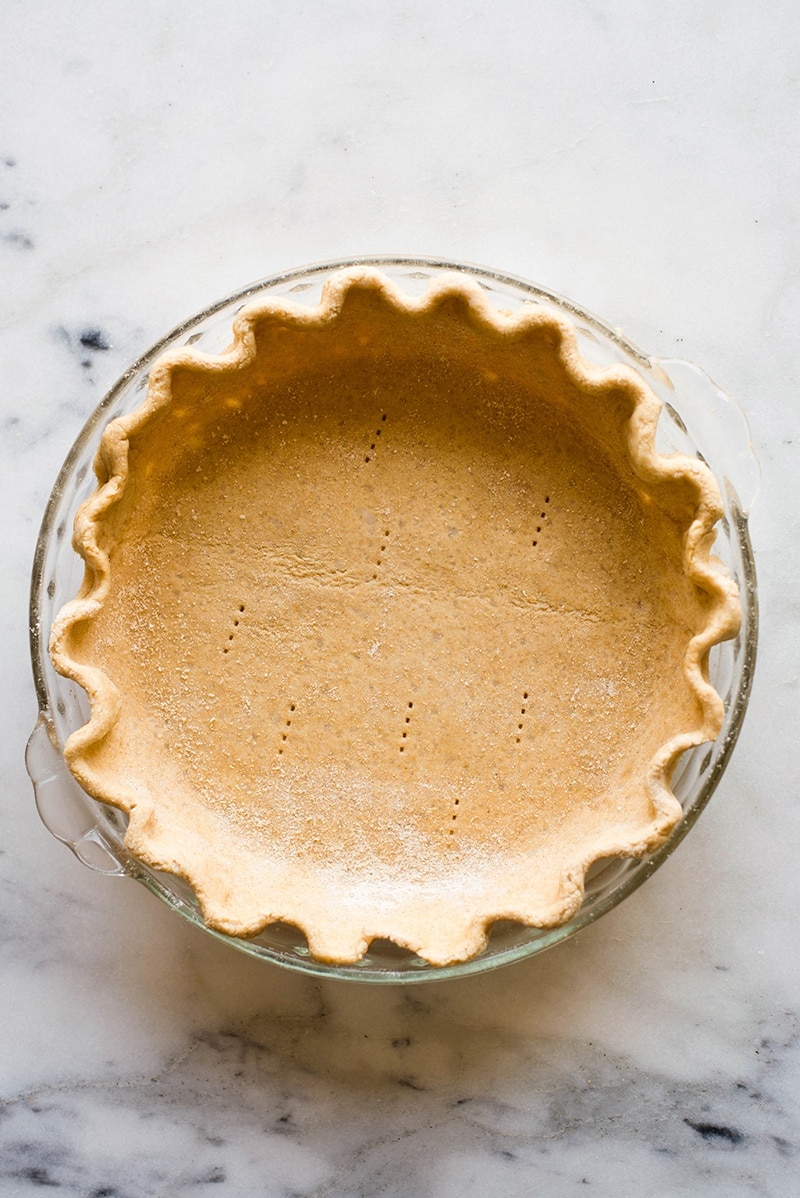 HOW TO BLIND BAKE PIE CRUST

Wondering how to blind bake this coconut oil pie crust?

In case you don’t know what blind baking means, well, simply put, it means pre-baking the pie crust and adding the filling only after the crust is baked.

Is it necessary to blind bake the coconut oil pie crust? No, not for all pie recipes. Only for those that require it. Blind baking helps to prevent overcooked pie filling so if the recipe requires, you should definitely do it. It’s not hard at all.

The weights allow for the pie to stay put while it bakes so it doesn’t rise up or bubble.  It’s not to give it muscles.  LOL. 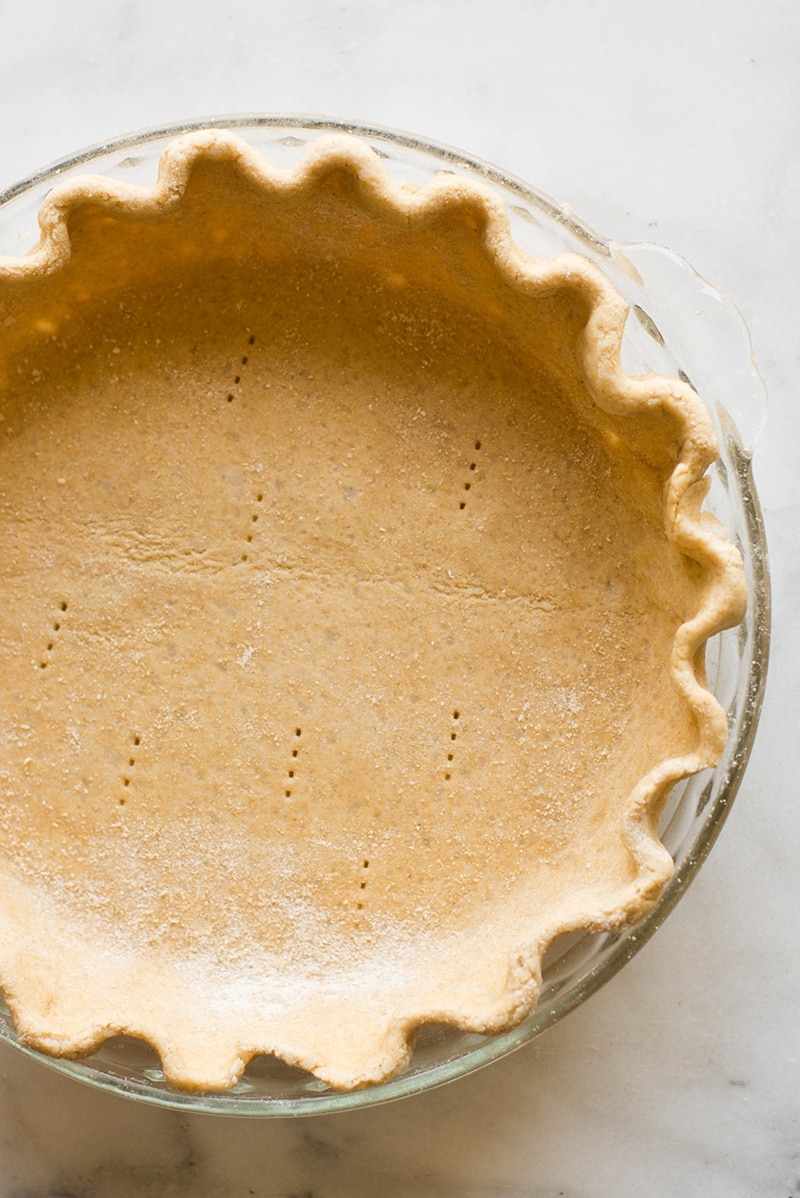 CAN YOU MAKE PIE CRUST AHEAD OF TIME?

Making pies is time-consuming, especially during the holidays when you have to prep and cook so many dishes and side dishes. The good news is this dairy free pie crust is a great make ahead pie crust.

To make it ahead of time, just follow the steps above for the blind bake and have it ready to go! 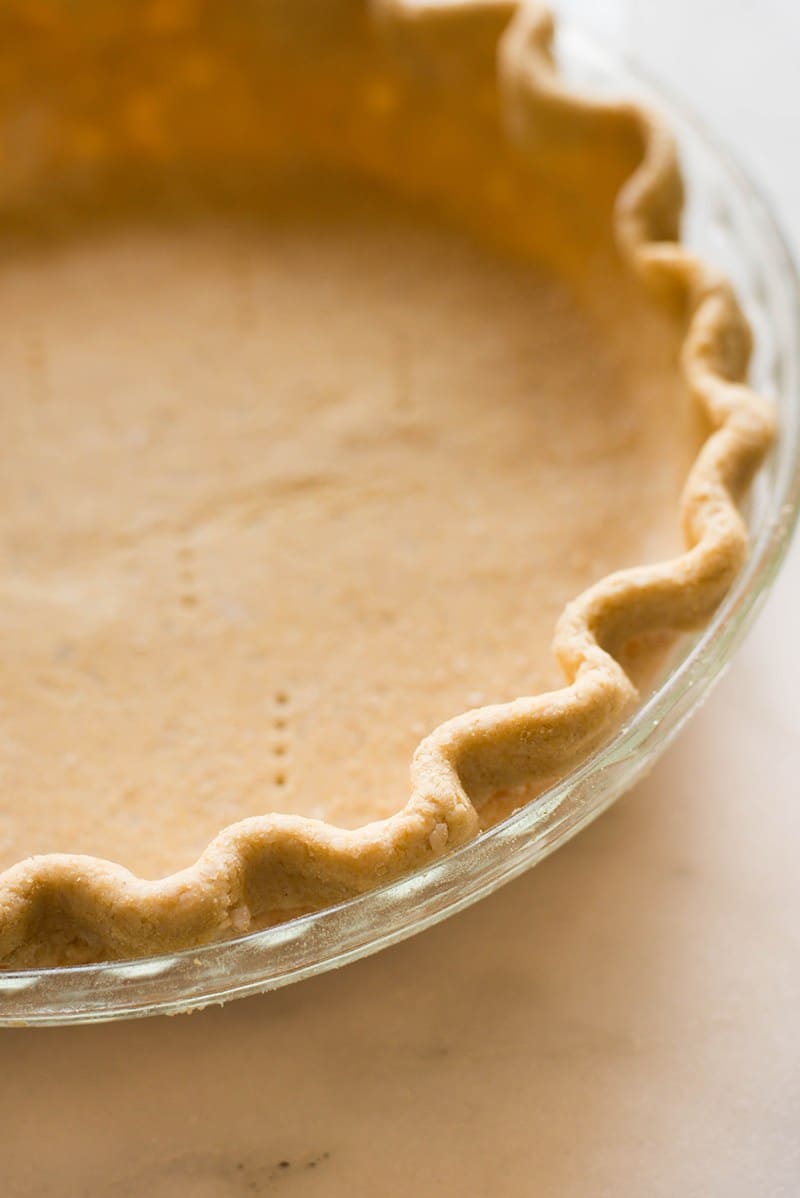 Keep this vegan pie crust recipe handy because Thanksgiving is coming and I’m pretty sure you’ll need it.

Now the exciting part – what to do with our low-calorie pie crust? PIE! Of course. What type of pie? Let’s see… we have pecan pie, sweet potato pie, and pumpkin pie. OMG yum, right?

Easy to make and delicious, this Healthy Pecan Pie made with our flaky oil pie crust is the perfect dessert during the Fall months. 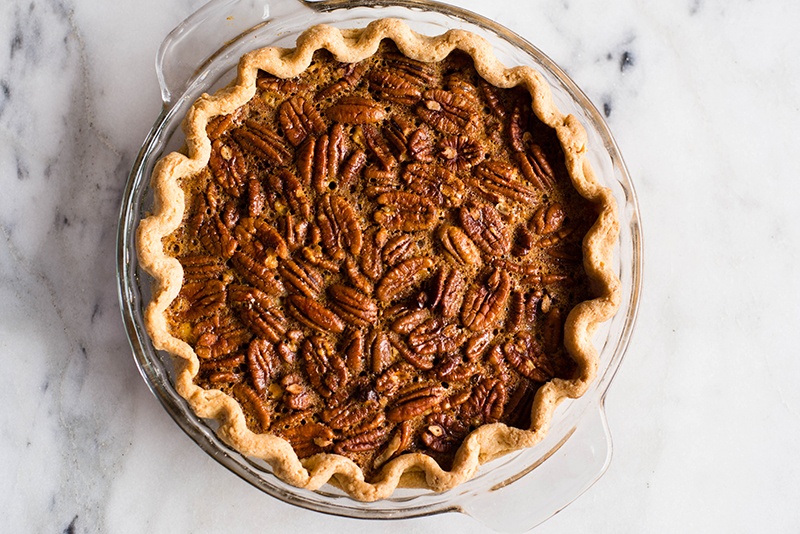 You can make this pecan pie as a dessert for Thanksgiving if you want a delicious alternative to pumpkin pie. Get the recipe.

This Southern Sweet Potato Pie is made from scratch with whole, unrefined ingredients and is a popular pie here in the South. 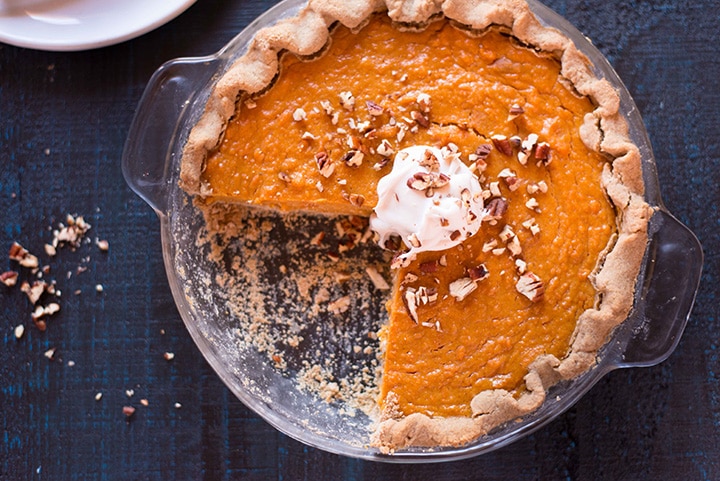 Sweet and yummy, this is how Southern Sweet Potato Pie tastes like if you never had a slice. But mine is extra special because it’s healthy. Get the recipe. 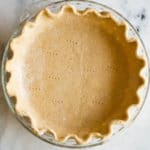 This coconut oil pie crust can easily be doubled to make two pie crusts for pies with a top and bottom and it’s perfect for anything from pumpkin pie to cherry pie! Plus, it’s dairy free, vegan and easy to make.