This spaghetti squash pad thai recipe is a low carb alternative to chicken pad thai and is so incredibly delicious!  This recipe is clean eating, gluten-free, dairy-free, and paleo. 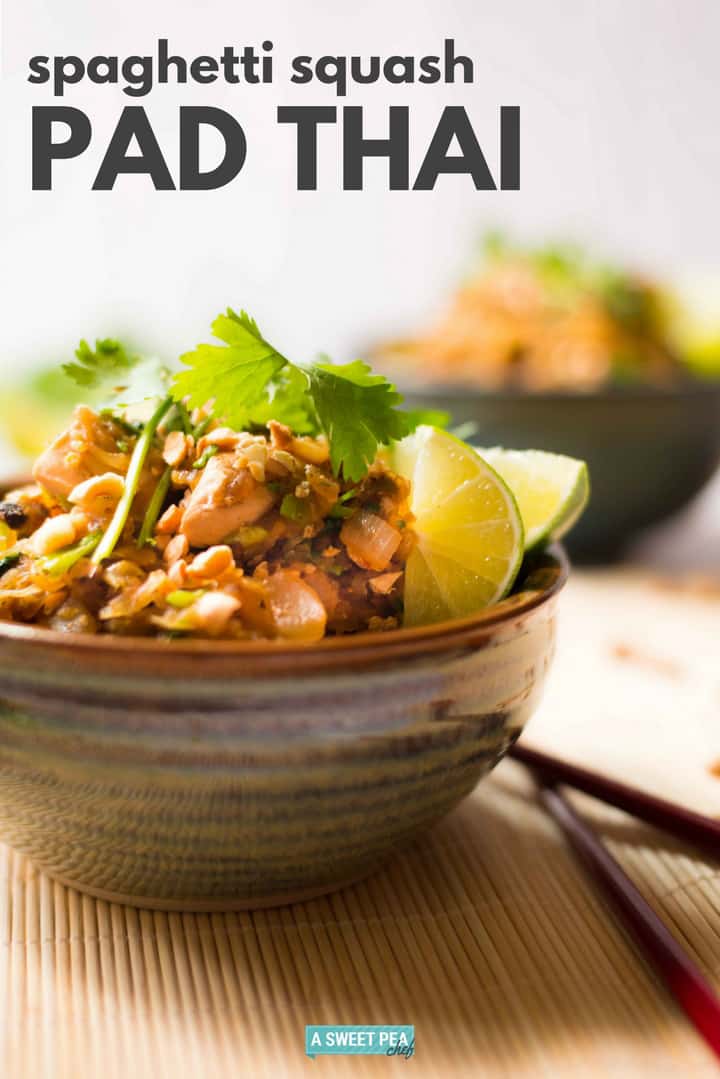 Pad thai is one of my absolute favorite Thai foods.  The combination of flavors and textures and sauce and heat is just so amazing.

My only sadness with pad thai is that I don’t often get to enjoy it because it is pretty heavy on the carbs, considering it is made up of a lot of noodles.

Really, what this means is I get to enjoy pad thai more often, and you can, too! 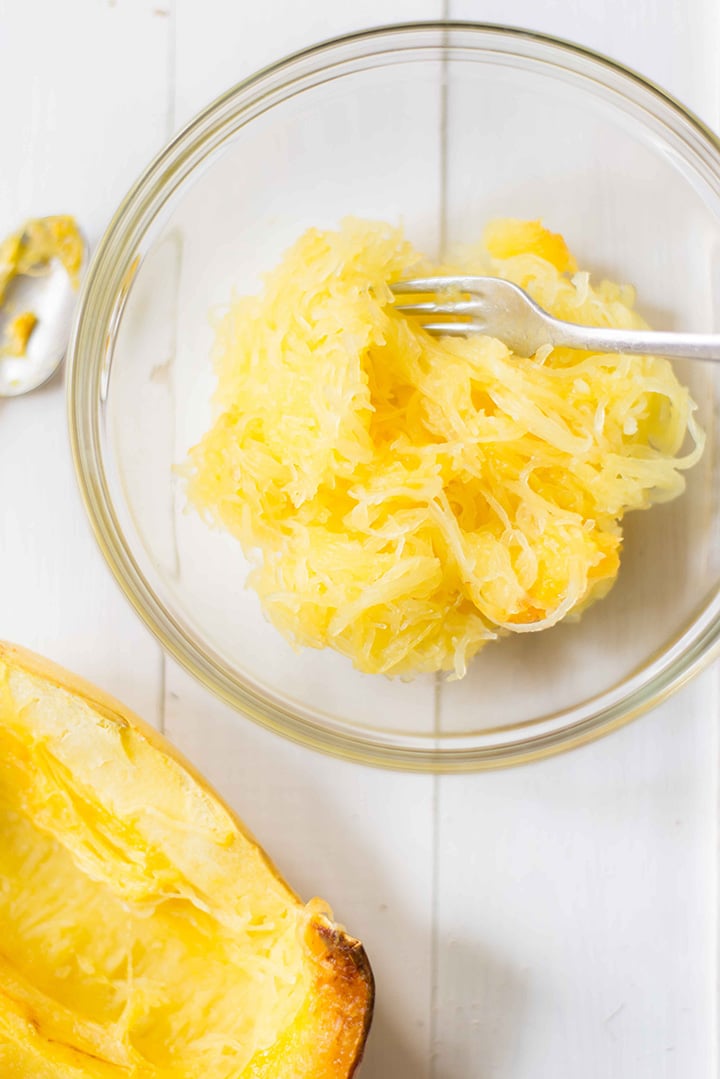 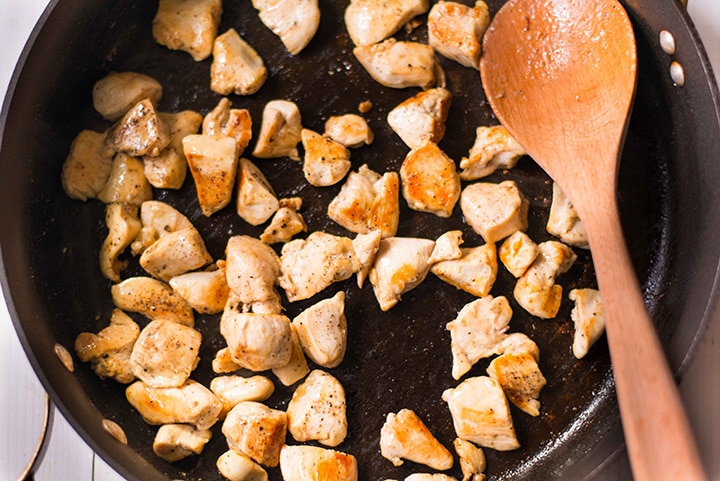 What is Pad Thai?

If you’ve never tried it before, pad thai is delicious.  It’s basically a stir fry that consists of rice noodles, stir-fried with eggs and another protein, like tofu, chicken, or shrimp. The strong flavors comes from the pad thai sauce, which commonly contains tamarind pulp, fish sauce, garlic, red chili pepper, and palm sugar and it’s usually served with lime wedges and topped with chopped peanuts.  See?  YUM.

One of my favorite things about pad thai is all the toppings you get with it – they add all sorts of flavors and textures.  Common pad thai toppings include lime wedges, roasted peanuts, bean sprouts, cilantro, and so on.  I use many of these in this spaghetti squash pad thai recipe. 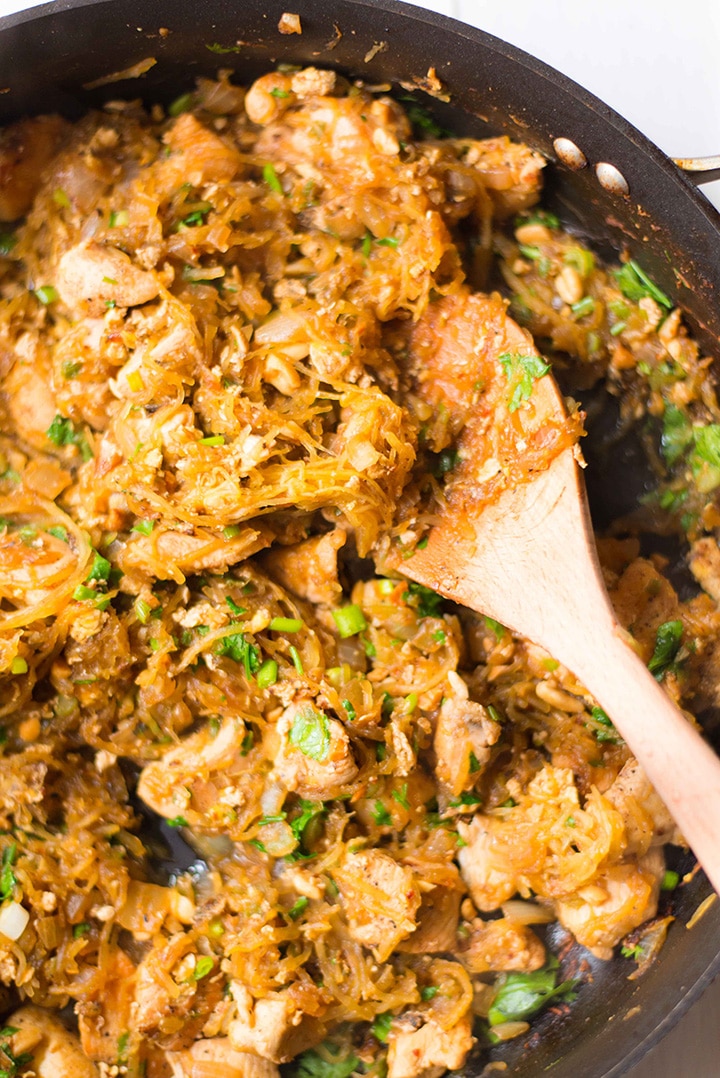 How To Make Spaghetti Squash Noodles

HOW TO BAKE SPAGHETTI SQUASH NOODLES IN THE OVEN

It takes literally 5 minutes to prep the spaghetti squash to be cooked once the oven is preheated.  So easy!

HOW TO COOK SPAGHETTI SQUASH IN THE MICROWAVE

The microwave method is quicker, but doesn’t provide as much flavor as the roasting – but works great when you’re in a rush! 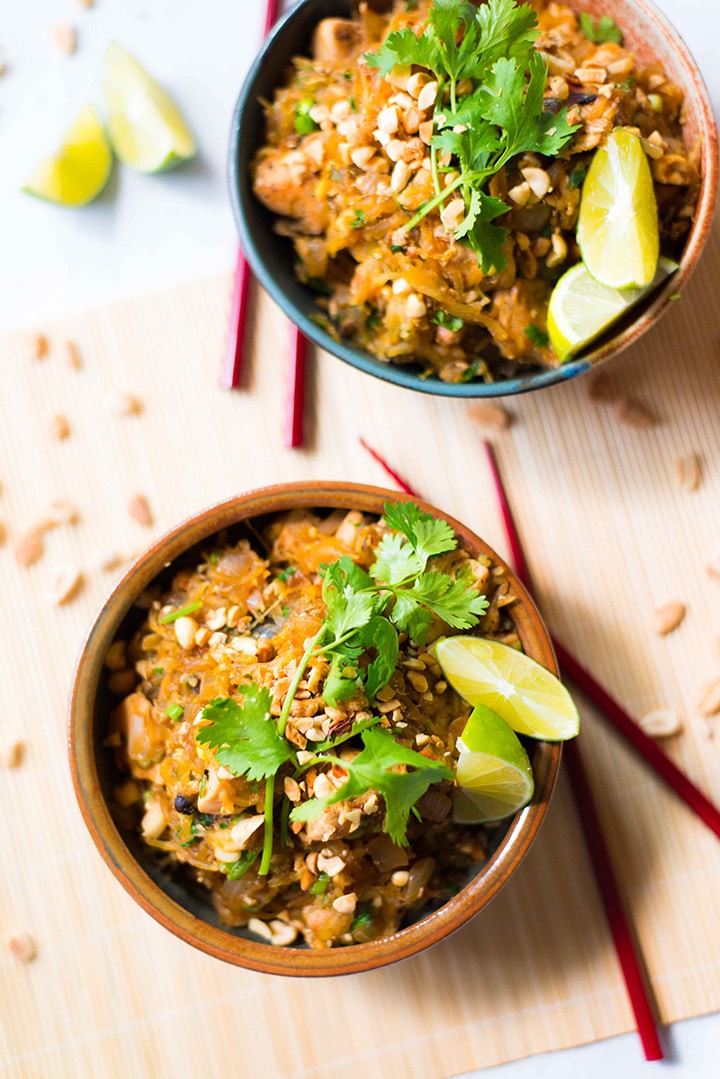 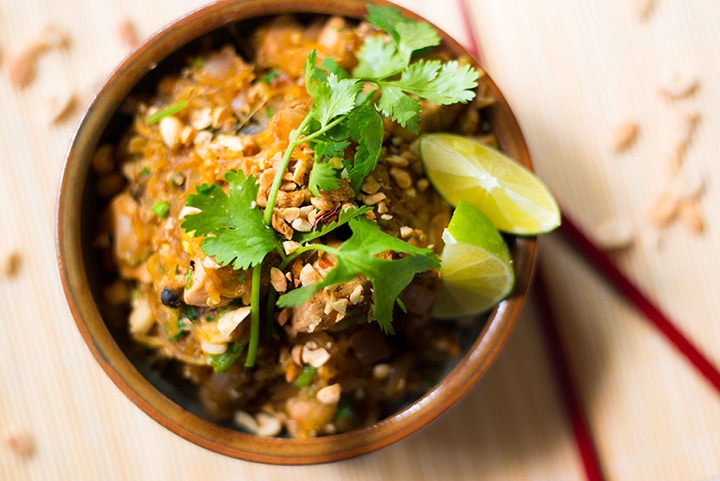 How To Store Spaghetti Squash

Believe it or not, it is very easy to freeze spaghetti squash noodles.  Yay!  While the texture wont be quite the same as if it were freshly baked (it will be slightly more soggy once defrosted), it will still work in a pinch.  All you have to do is portion it out and freeze it without any sauce.

Freeze the cooked chicken and pad thai sauce separately.  Then, when you’re ready to cook the pad thai, allow the frozen pad thai sauce and spaghetti squash noodles to thaw overnight in the fridge, then add everything together and heat through.  Easy peasy. Good news, paleo friends.  This pad thai recipe is paleo.  The major culprit for why pad thai might not be paleo would be the noodles and the soy sauce.  So, since we are using spaghetti squash noodles instead of wheat noodles, it makes it easy.  While rice noodles aren’t technically not paleo, they’re also not Not paleo, meaning they cause some confusion for people.  Also, this recipe doesn’t call for soy sauce, which makes it easy since soy isn’t allowed on a paleo diet. 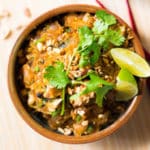 Your lifestyle is the key to success when it comes to weight loss! This post will review the Top 10 Popular Weight Loss Diets so you can learn about each one (and the benefits!) to find the best fit...

Quinoa is a healthy grain that leaves you feeling satisfied, not deprived. This post will explore the benefits of this versatile superfood, and share 12 healthy quinoa recipes you’ll love!