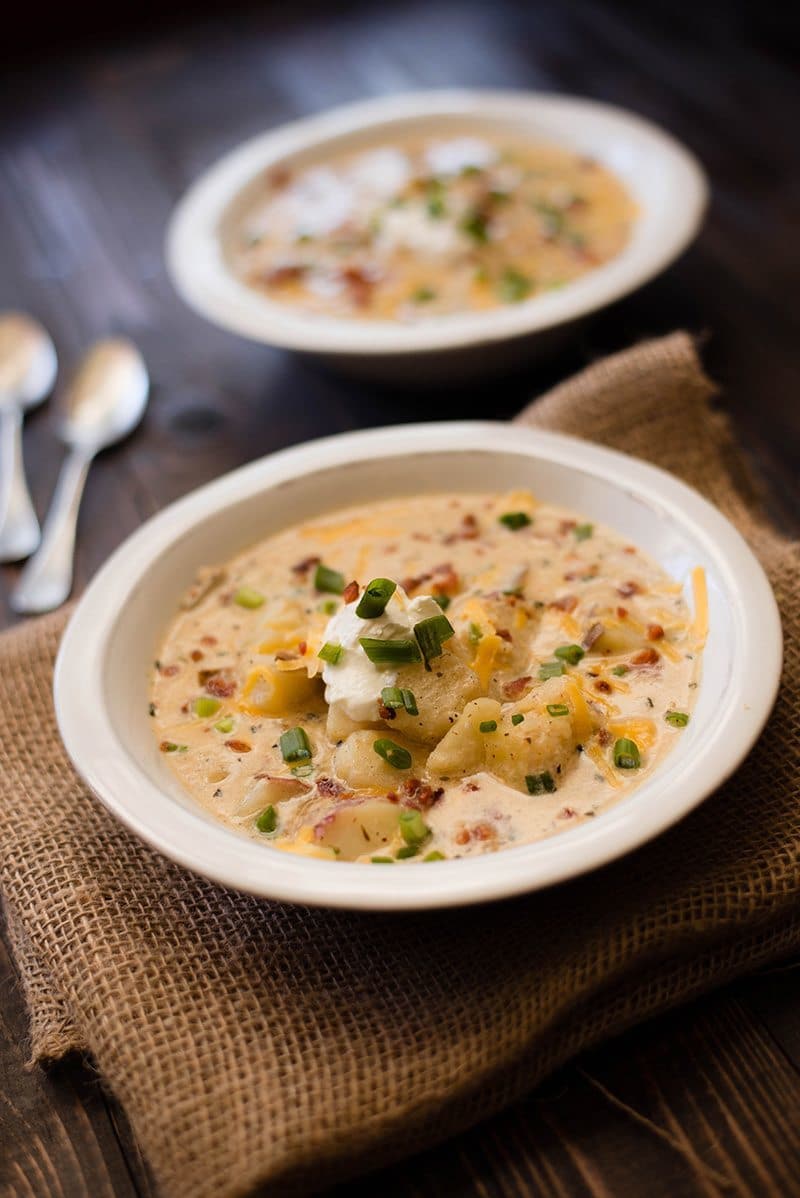 Gotta love those glass-shattering moments when you recognize the possibilities of what you can do in your own kitchen, right?

Well, that was the case for me and this Healthy Potato Soup.  Dustin and I are big fans of baked potato soup and often order it at restaurants.

I mean, what’s not to love?  You have tender baked potatoes, creamy cheddar cheese, crunchy bacon pieces, crisp sliced green onions and some sour cream…are you kidding me?

Problem is – what likely makes it so terrifically delicious at restaurants is all the butter and heavy cream they add to it.

So, instead, I made my own light version and it’s still super good.  There’s not an ounce of heavy cream in this Healthy Potato Soup, which is more than I can likely say for most other recipes you’ll find.  Not that I am against cream, per se, but it does tend to make food less healthy.  And me more, well. hefty.

I use unsweetened almond milk and chickpea flour to make the soup thick and delicious without the added fat of butter and cream. Adding chicken stock makes it flavorful and it combines with the milk and flour mixture to make the soup velvety smooth. You won’t even notice leaving out the heavy cream – it’s still as lusciously creamy as ever. I also use plain Greek yogurt instead of sour cream to have more protein and less fat in the soup.

Grab a bowl of this (light and) hearty soup and enjoy!

WHICH POTATOES ARE BEST FOR HEALTHY POTATO SOUP?

I love a combination of russet and red potatoes. I cube them and always leave the skin on for added color, texture, and taste. Leaving the skin on keeps the nutrient count up, too. Russet potatoes are starchy and that helps the soup thicken. Baby potatoes are an option, as are yellow potatoes. Cut the potatoes evenly if you can, to ensure the same consistency in every bite.

HOW TO MAKE HEALTHY POTATO SOUP VEGAN OR DAIRY-FREE

This Healthy Potato Soup is easily changed to suit a vegan diet. Simply do the following: 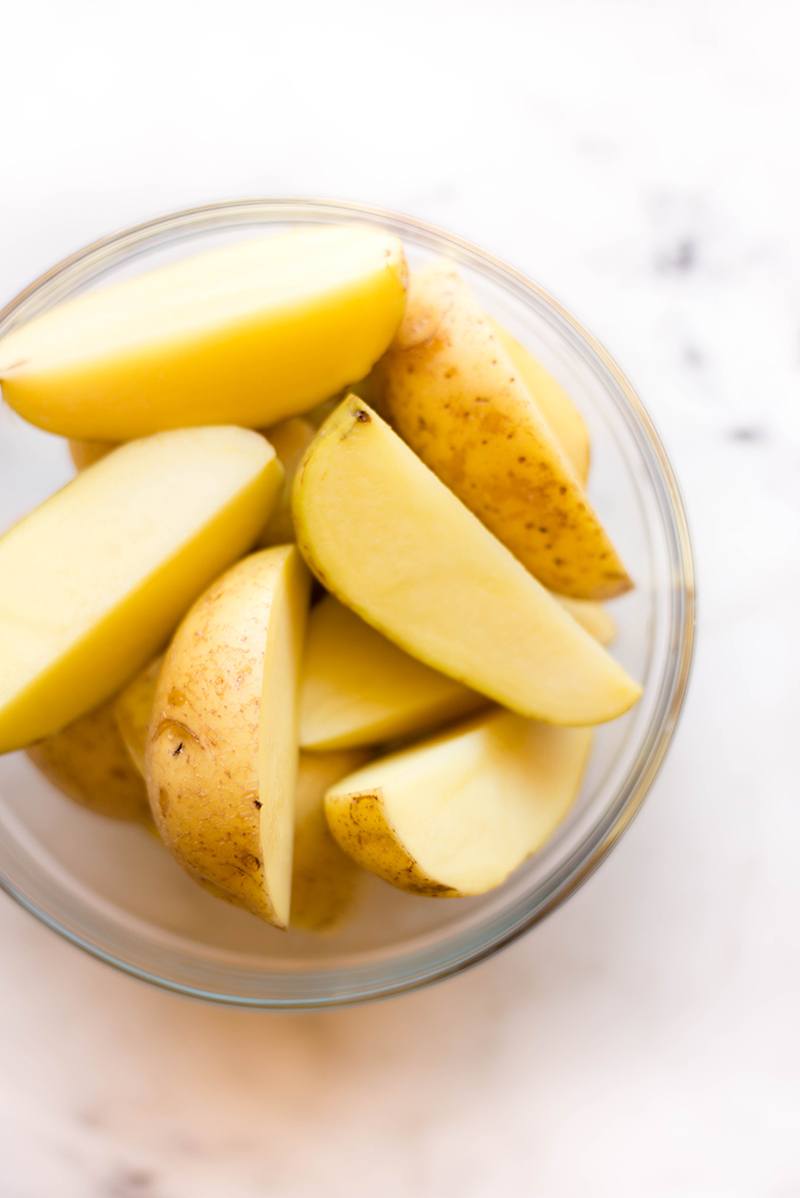 HOW TO STORE AND REHEAT HEALTHY BAKED POTATO SOUP

Keep leftover soup in an airtight container in the fridge for up to 4 days. The soup can be reheated in the microwave, stirring every now and then to distribute the heat evenly. Heating the leftover Healthy Potato Soup on the stove is another option. Again, stir until heated through to make sure it does not scorch on the bottom of the pan.

You can freeze Healthy Potato Soup, but the texture will change and won’t be quite as creamy. As long as you know to expect that the soup will be grainier and may separate, you’re good to go. Soups made with non-dairy milk like coconut milk, do fare a bit better when frozen but still aren’t as good as fresh or refrigerated soup.

This recipe is super good-for-you without sacrificing any of the creamy, savory taste. It’s a yummy, clean-eating soup at its best! 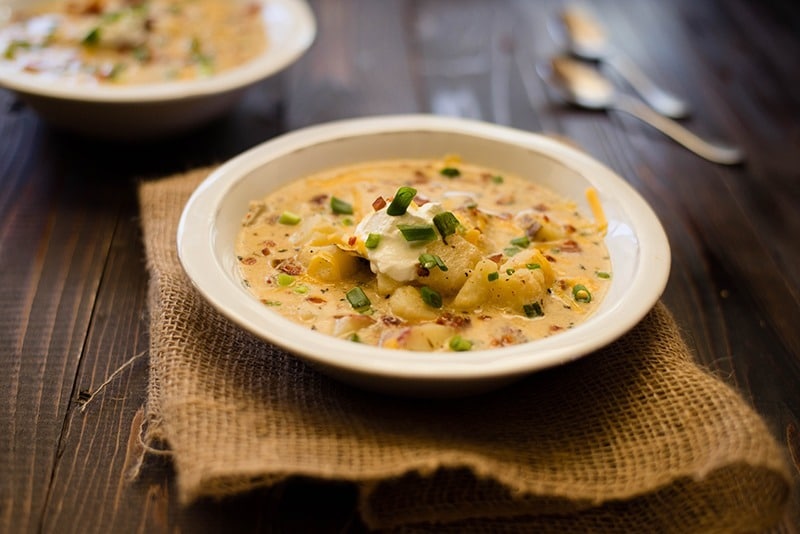 I adore soup! A heaping bowl of goodness is so satisfying. And you can’t beat the delicious smell of a pot of soup cooking on the stove. ← Pure deliciousness! Here are more of my favorite healthy soup recipes: 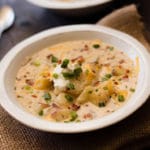 20 thoughts on “Healthy Baked Potato Soup | A Satisfying, Yet Lightened-Up Version of an Old Classic”