From which vegetables can be spiralized to what vegetables make the best pasta, this post is your Spiralizer Beginner’s Guide to understand all things Spiralizer + grab tons of easy veggie spiralizer recipes! 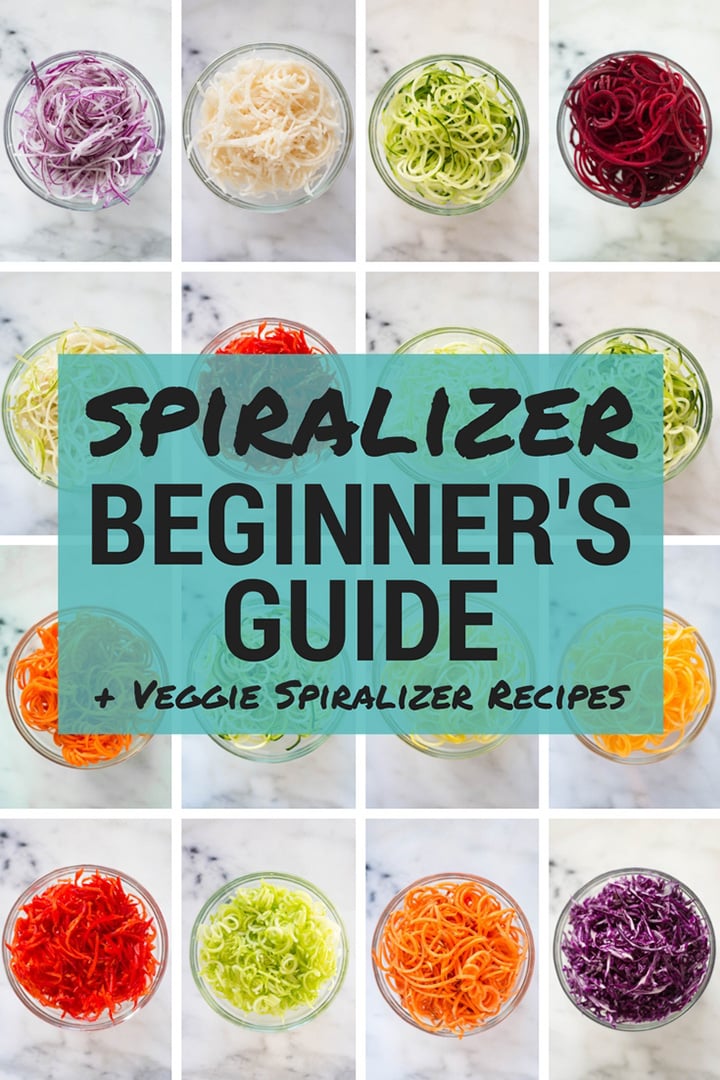 How To Make Spiralized Veggies

One of my absolute favorite kitchen tools is my spiralizer – it helps make cooking veggies so much easier and funner and is a great way to replace noodles with much healthier options.  In this post, I’m going to show you how to spiralize a TON of different veggies so you can see how easy it is and maybe get inspired to try them for yourself.

I am using this spiralizer which costs about $25 and comes with several attachments.  It’s been awesome and I highly recommend it.

If you don’t have a spiralizer tool, you can also use a “Y” peeler or a regular vegetable peeler to make long, think strands of many of the vegetables we’ll be working with today. While it’s not quite the same, it’ll still do the trick! 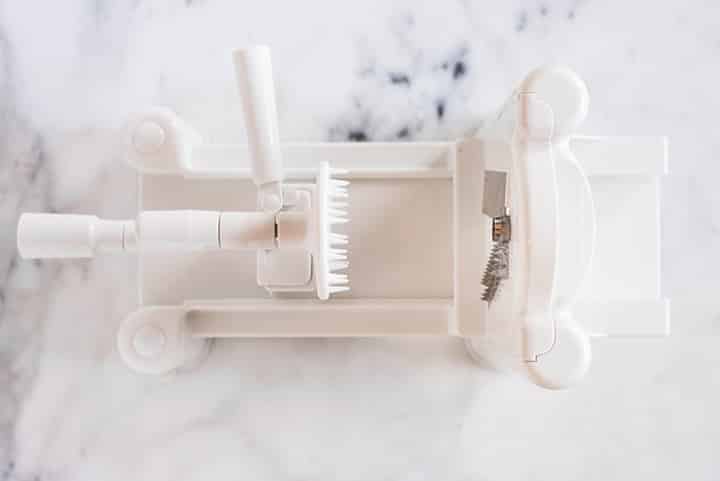 Best Vegetables To Spiralize for Pasta

While you can spiralize all sorts of vegetables, squash, and fruit for pasta, I do have my favorites.  The characteristics of what makes a good spiralized noodle include (1) flavor, (2) texture, and (3) nutrition.  Personally, my favorite vegetable to spiralize for pasta is zucchini, but the following list contains some great options as well:

How To Spiralize Zucchini 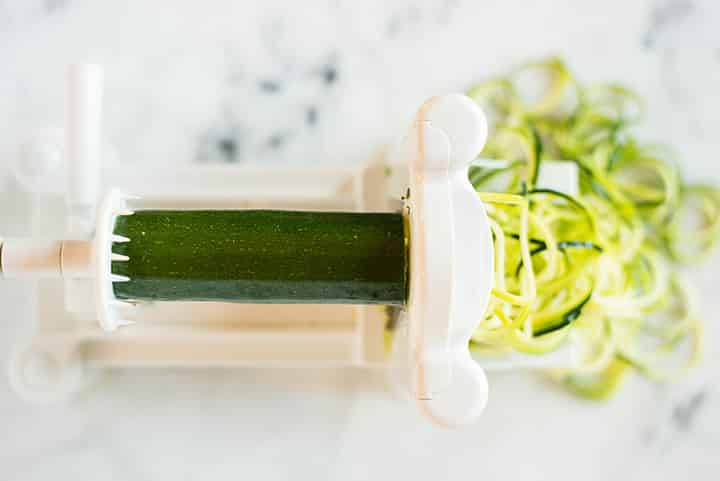 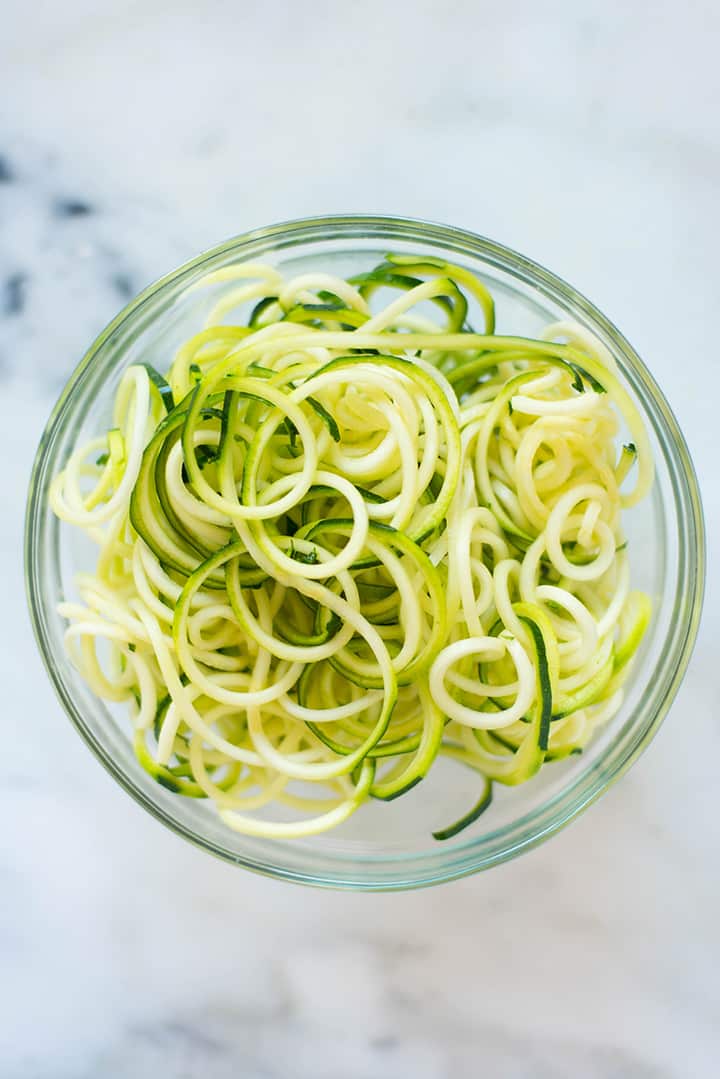 Zucchini is my most commonly spiralized veggie and it couldn’t be easier.  Just remove both ends of the zucchini as straight as possible and then place onto the spiralizer.  No need to remove the peel, as it’s edible and nutritious.

I try to find straight wide zucchini for making noodles — this makes it as easy as possible for making the noodles.

How To Spiralize Yellow Squash 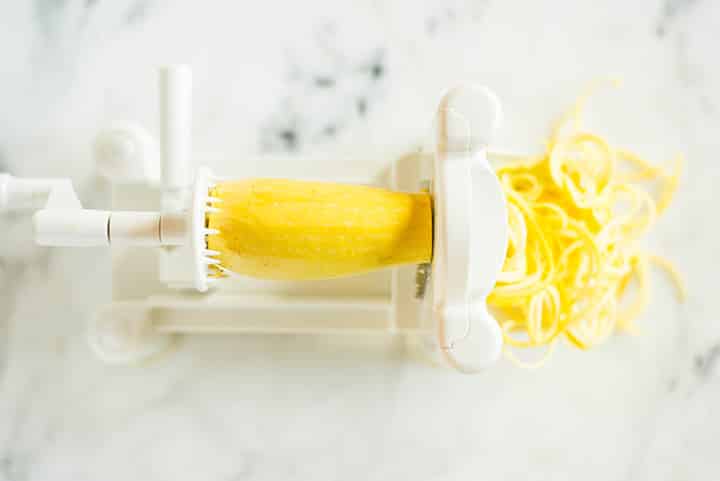 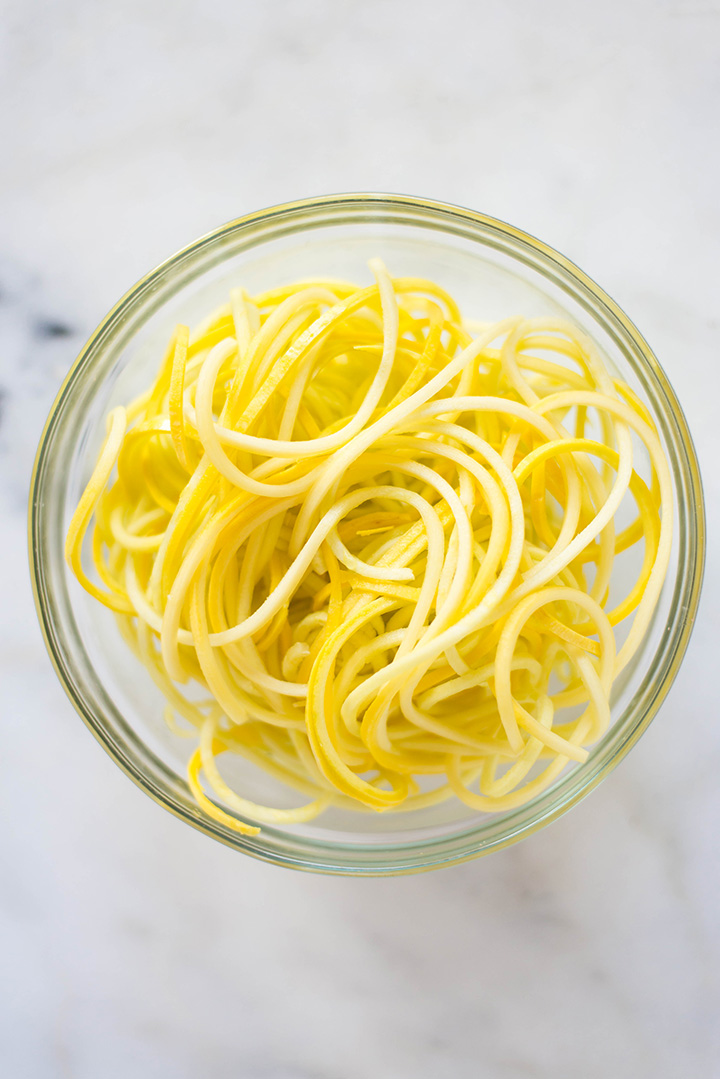 Just like with zucchini, yellow squash makes perfect zoodles – just remove both ends of the yellow squash in as straight a line as possible and then place onto the spiralizer.  No need to remove the peel, either.

How To Spiralize Sweet Potato 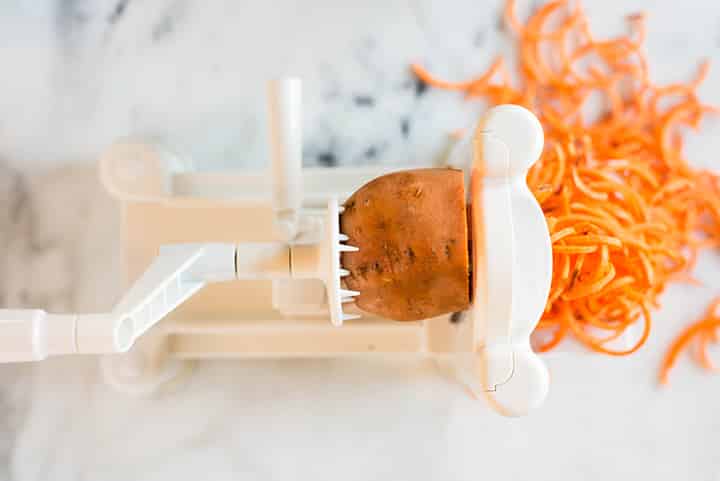 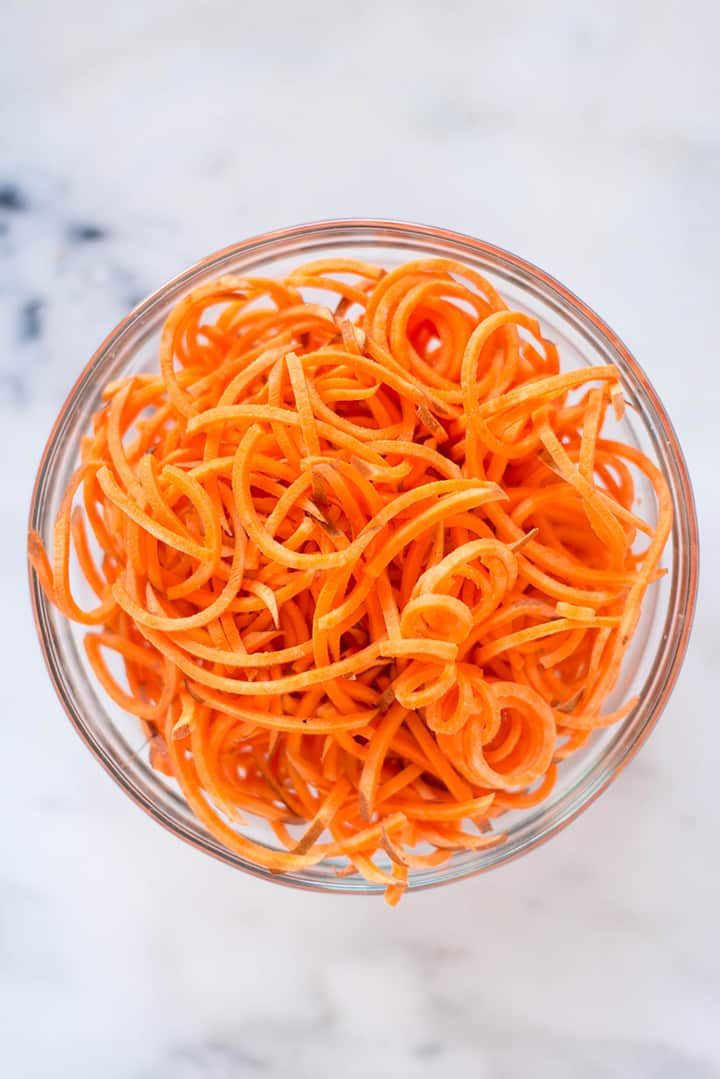 Sweet potato noodles are great because they are hearty and hold up very well to cooking.  You can choose to remove the sweet potato skin if you choose, but I often leave it one, especially since it contains high amounts of nutrients and fiber.

Just like with the zucchini and squash, remove both ends as flat as possible and then attach to the spiralizer.  Then, spiralize into sweet potato noodles.

How To Spiralize Cabbage 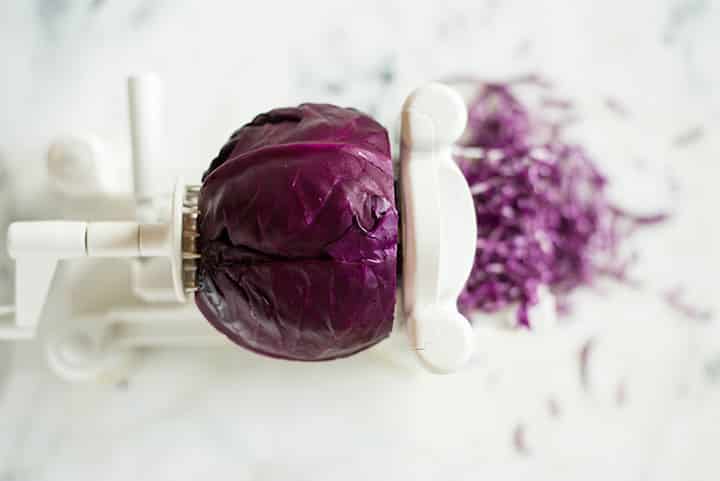 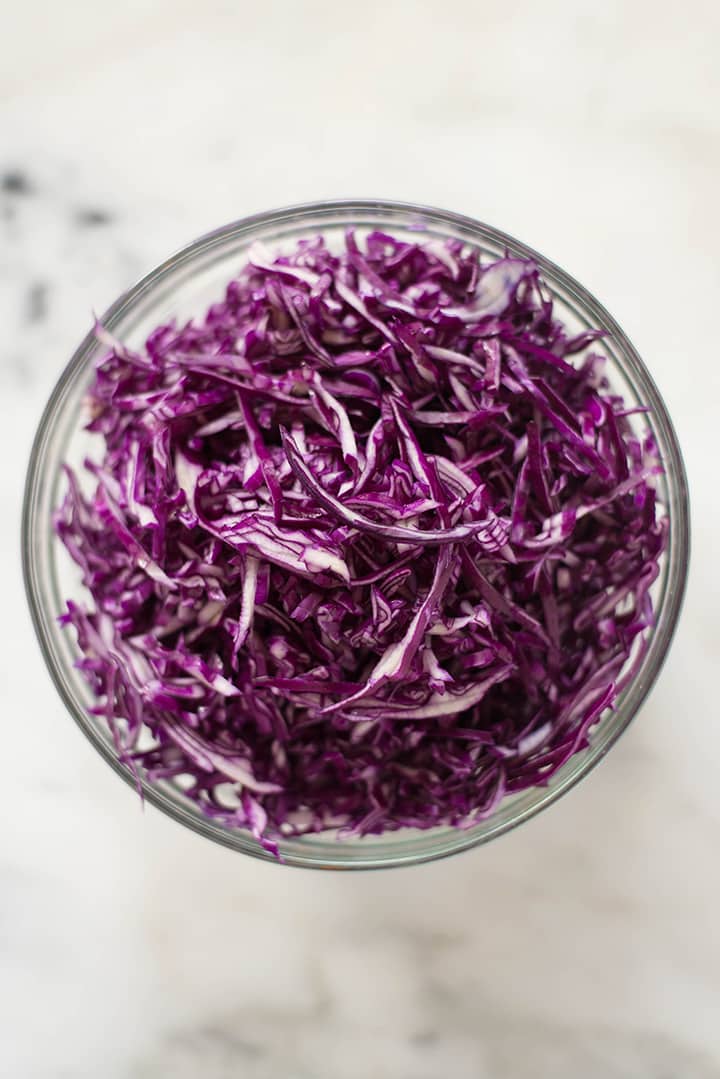 Using a spiralizer for cabbage, either red or green cabbage, is an easy way to shred cabbage perfectly for cole slaw or as a topping for chili or tacos.   Just remove to outer layer of the cabbage and cut the root end so that it’s flat before attaching to the spiralizer.  So flipping easy!

How To Spiralize Carrot 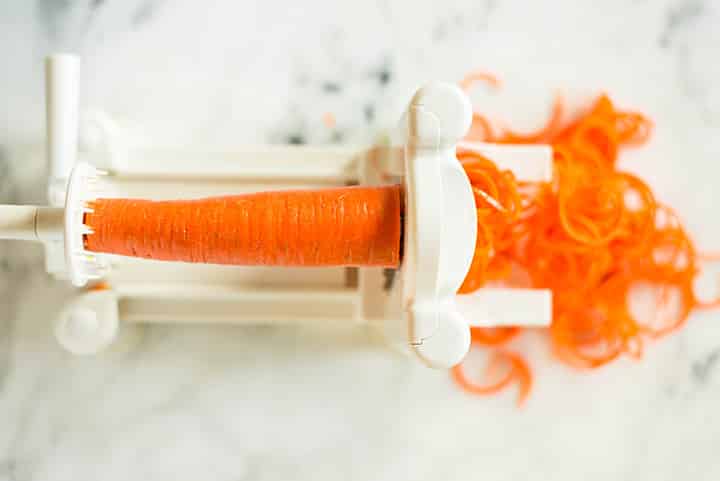 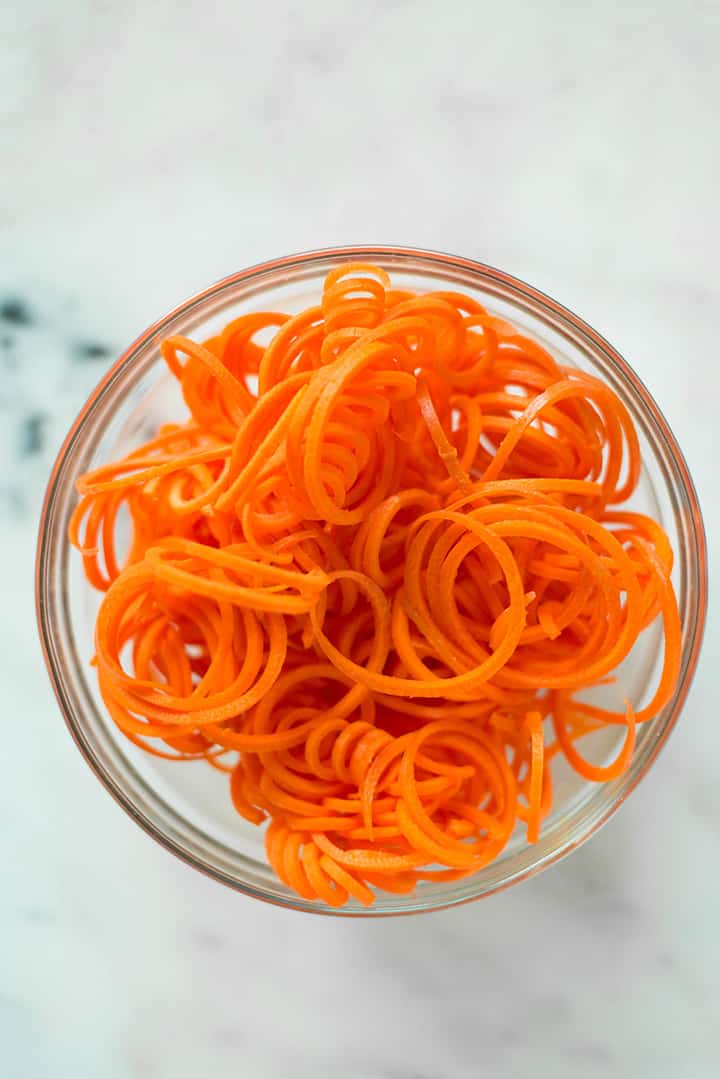 Carrots can be a little trickier to turn into noodles if you don’t have the right size, since they can get out of alignment with the spiralizer and need to be repositioned.  You’ll want to use wide carrots, if you can, and start with the widest part of the carrot towards the blade.  Then, cut both sides evenly and attach to the spiralizer. Spiralized carrots can be added to raw salads for a tasty crunch.  Plus, kiddos love them as a fun new way to eat their veggies.

How To Spiralize Cucumber 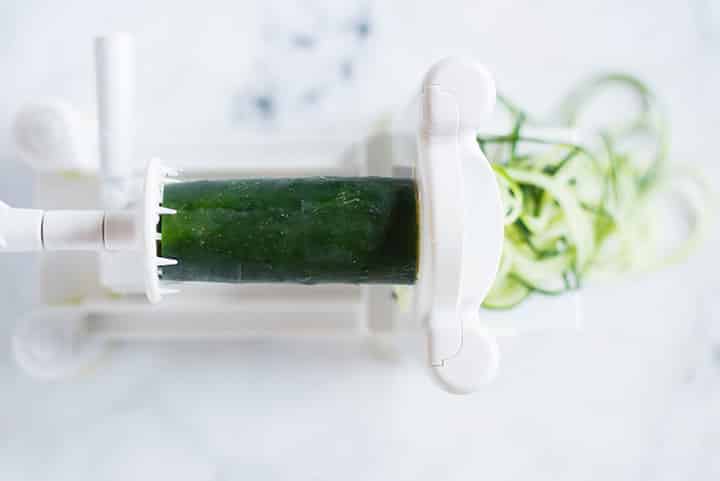 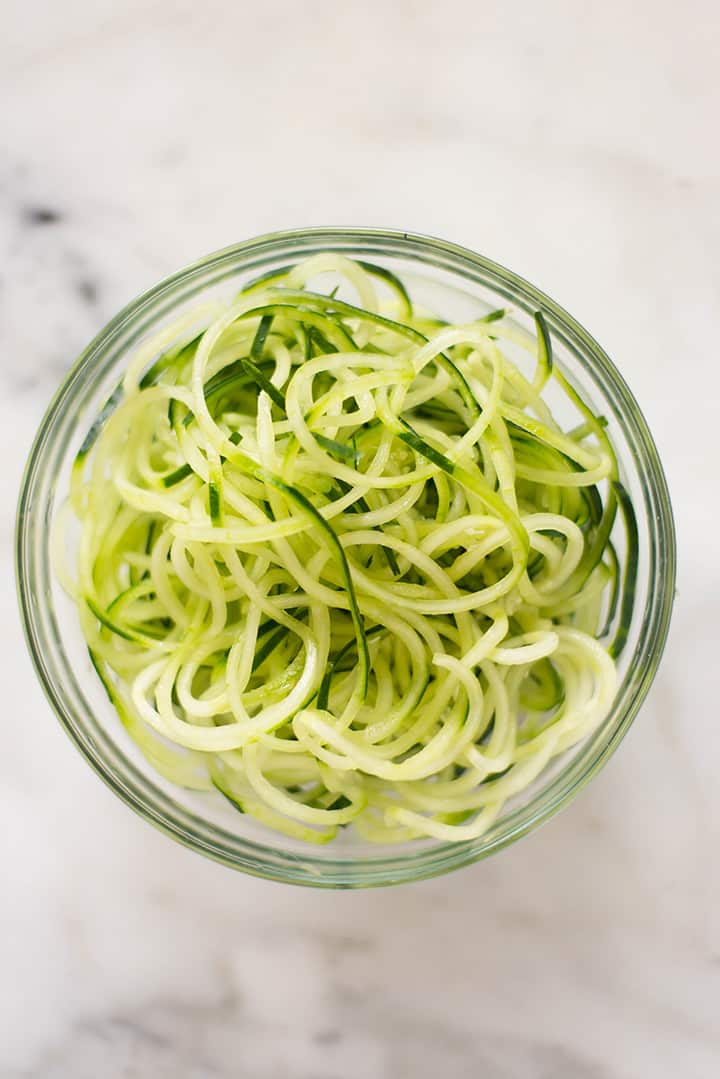 Spiralized cucumber is perfect for adding to salads and couldn’t be easier.  Just like with zucchini, cut both ends flat and then spiralize.  Because cucumbers can be a little soft, you’ll also get quite a bit of juice as it is spiralized, depending on how soft the cucumber is.  English cucumbers work best.

How To Spiralize Bell Pepper 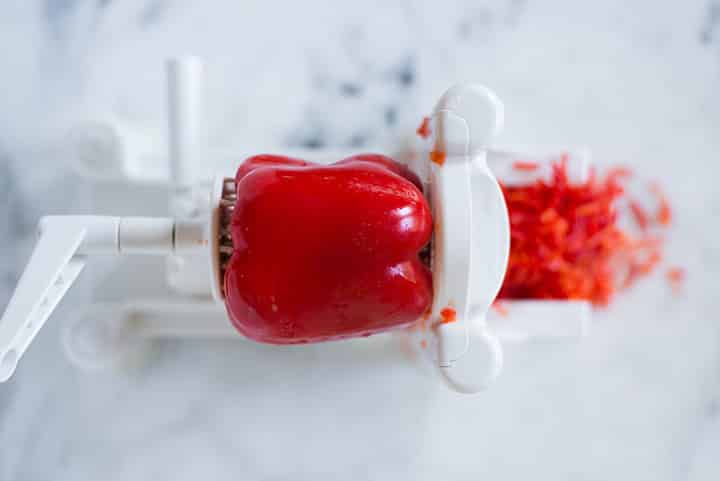 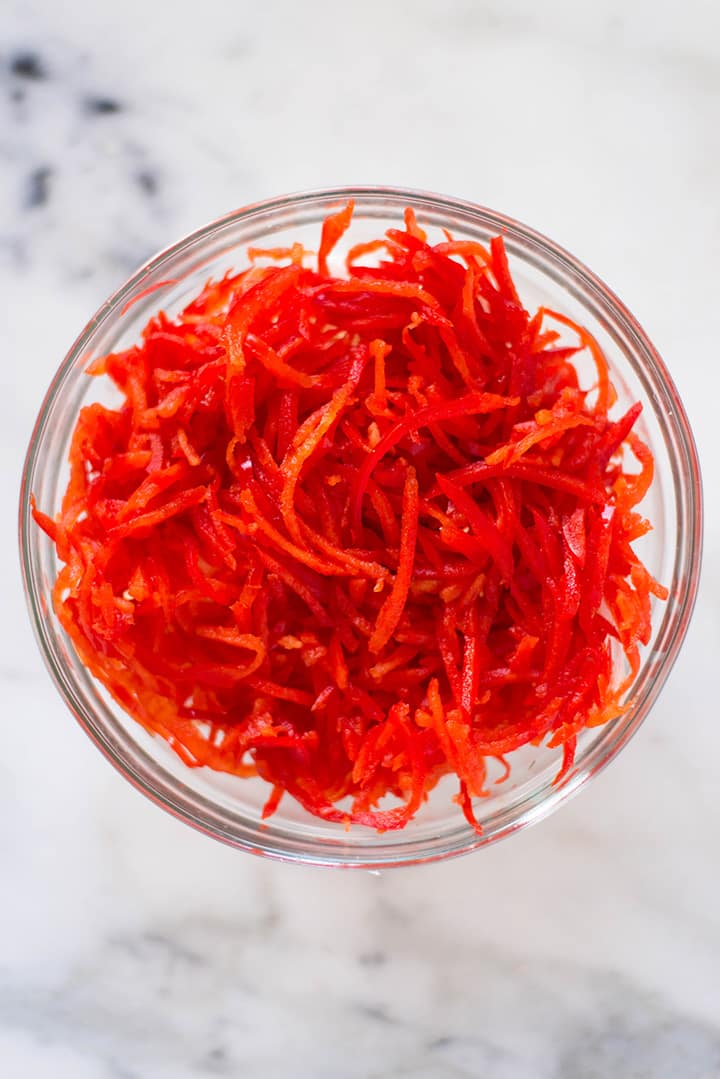 Spiralized bell pepper is great for adding to fajitas, in a quick saute, or omelets.  Make sure the tip of the stem is cut down as flat as possible and then attach the bell pepper, non-stem-side towards the blade.  You’ll need to remove some of the seeds and core once it’s been spiralized, but it’s very easy to do so.

How To Spiralize Broccoli Stems 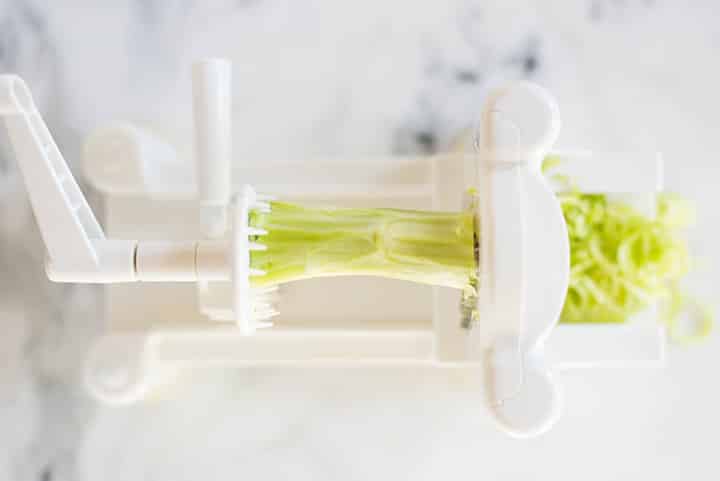 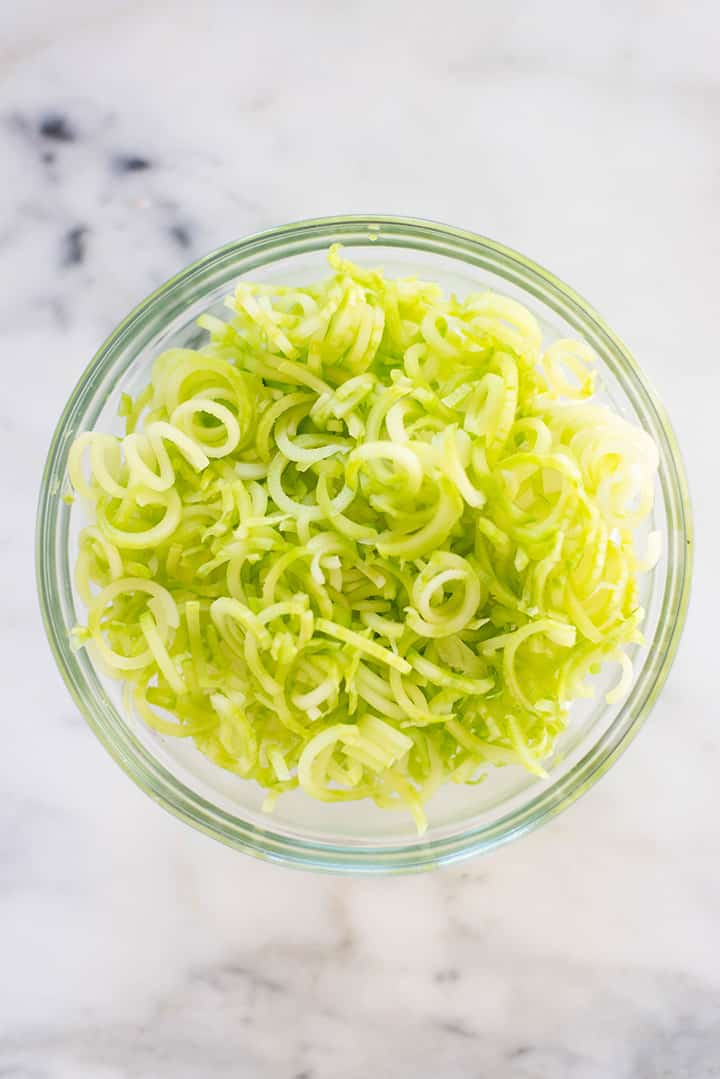 Do you usually just throw out your broccoli stems?  Turn them into broccoli stem noodles instead!  They’re so good and a great way to make use of a lesser used part of the broccoli.  You’ll want them to be as thick as possible, then remove any excess leaves, cut both ends flat and spiralize, just as you would a carrot.

How To Spiralize Butternut Squash 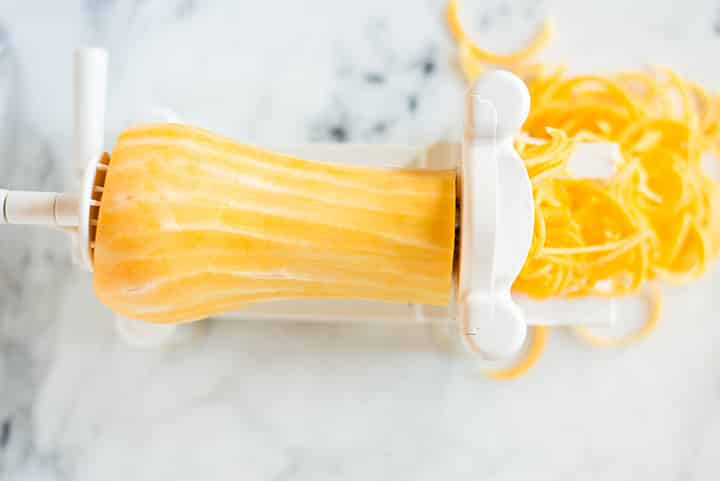 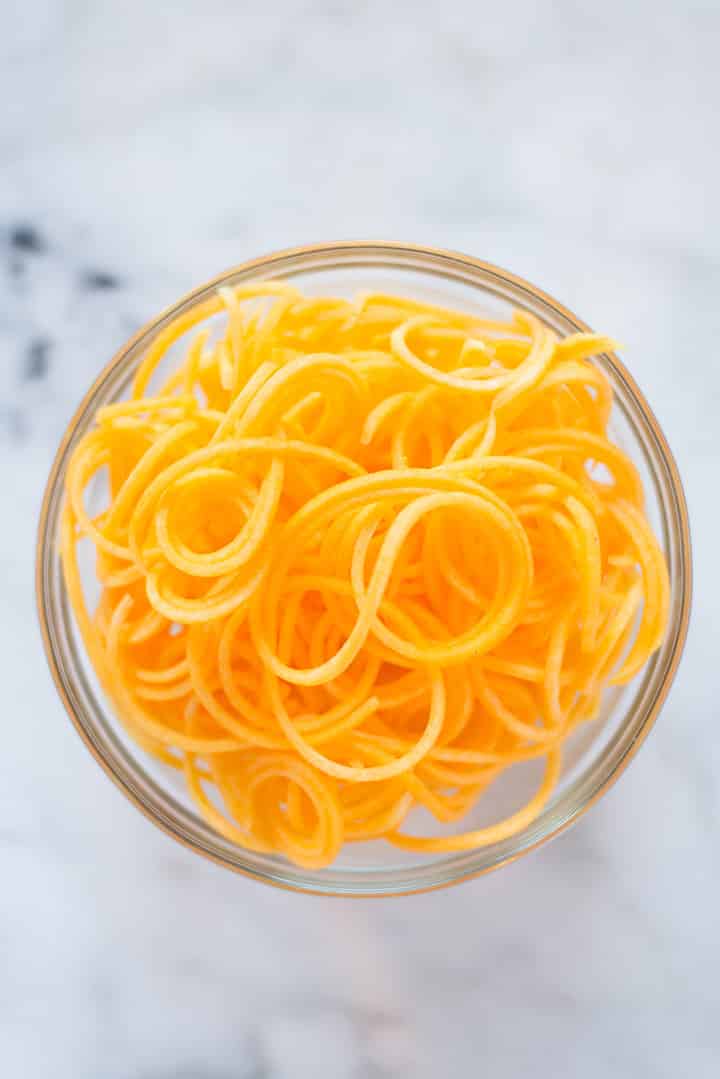 Have you ever tried butternut squash noodles?  They’re awesome — like sweet potato noodles, but with butternut squash!  You’ll need to remove the outer skin of the butternut squash using a vegetable peeler since it isn’t edible.  Then, slice both ends of evenly and attach to the spiralizer.  Try to find the most narrow and long squash, if you can.

How To Spiralize Beet 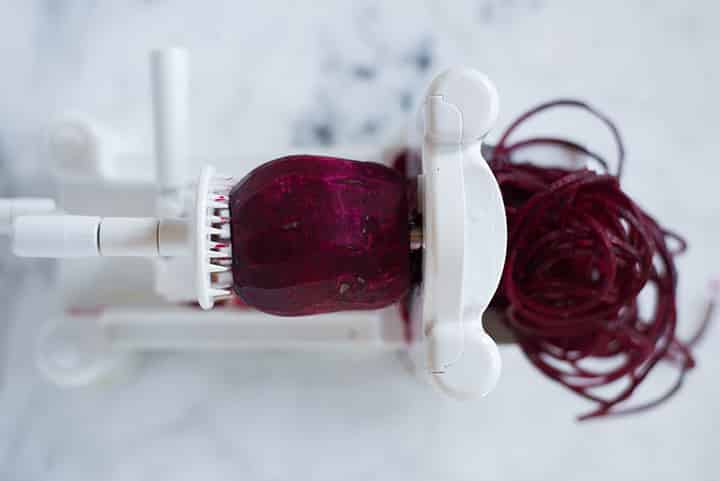 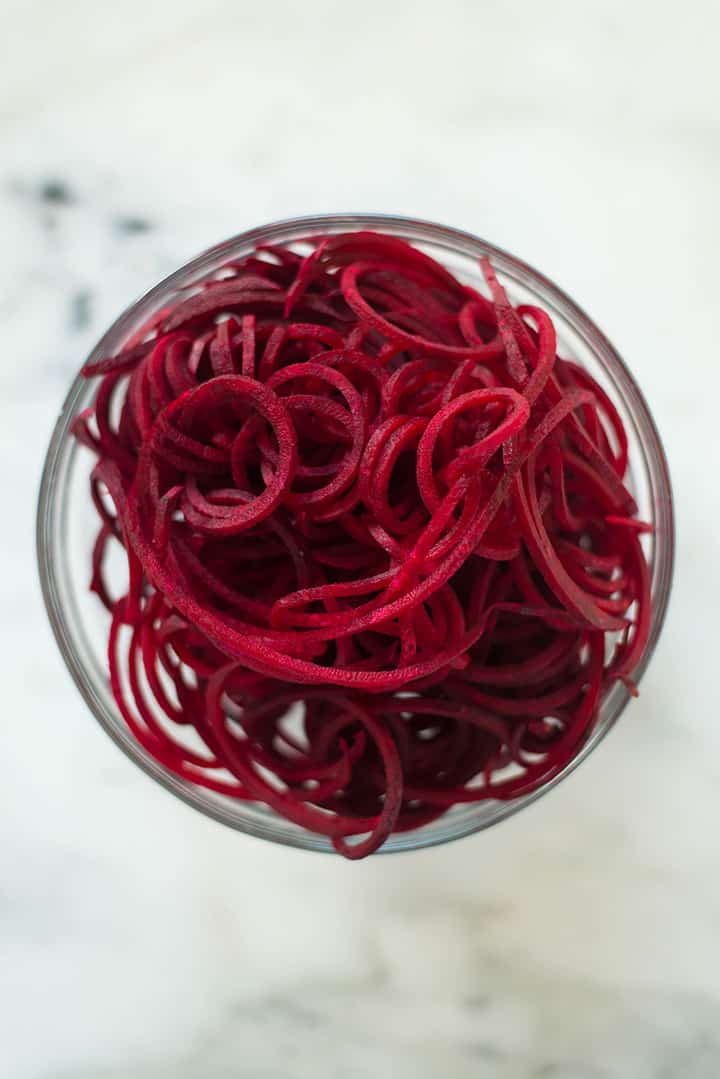 Spiralized beets are really pretty and make awesome noodle replacements.  To prep, just slice both ends off the beet to make it as flat as possible.  Then, peel using a vegetable peeler.  You’ll want the beet to be raw, not cooked.  Attach it to the spiralizer and transform it into beautiful beet noodles.  So easy.

How To Spiralize Red Onion 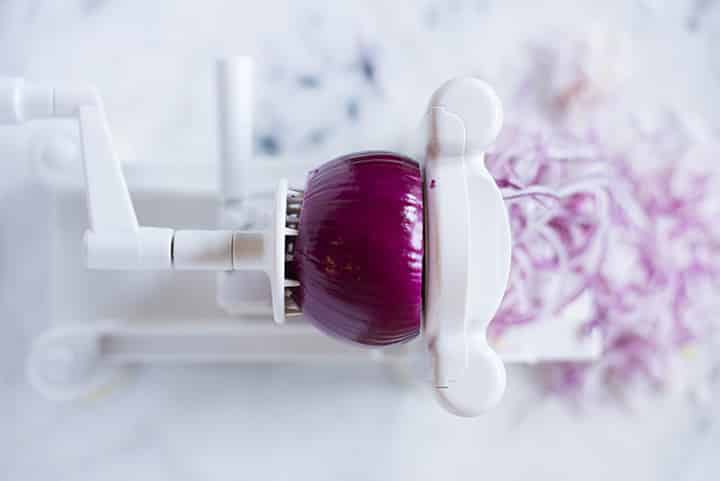 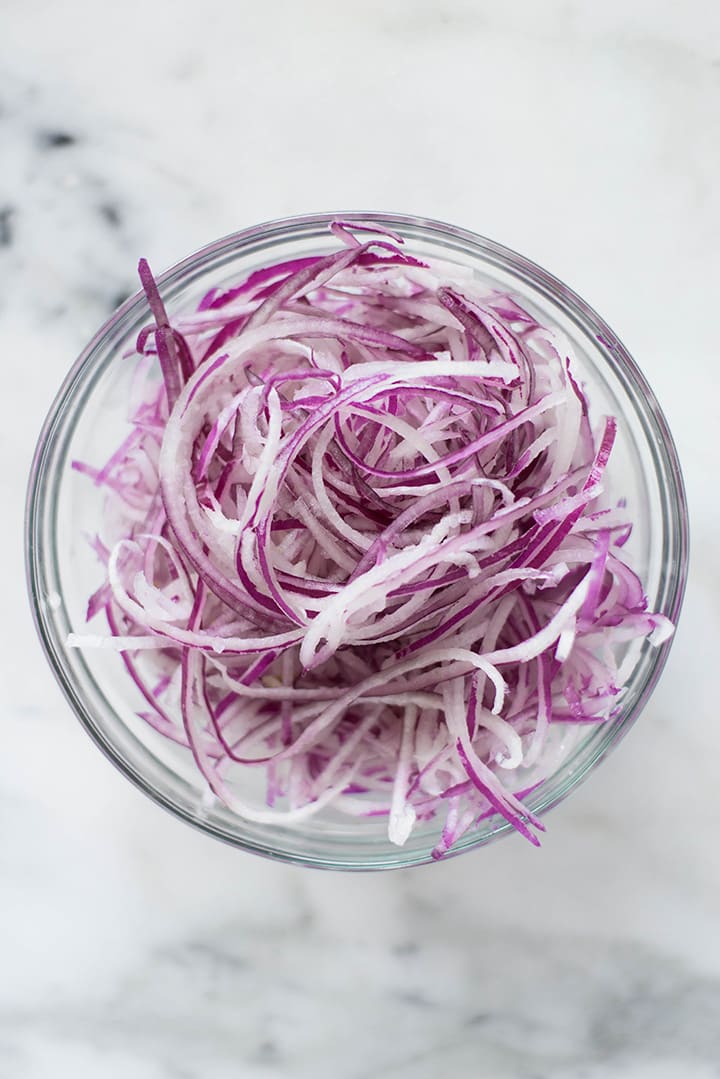 Spiralize a red onion or any onion to add as shredded onion in any recipe or as a topping on hamburgers.  Makes sautéed onions a breeze!  To make onion noodles, remove the outer peel of the onion and slice both ends flat so they can easily attach to the spiralizer. So much easier than slicing!

How To Spiralize Jicama 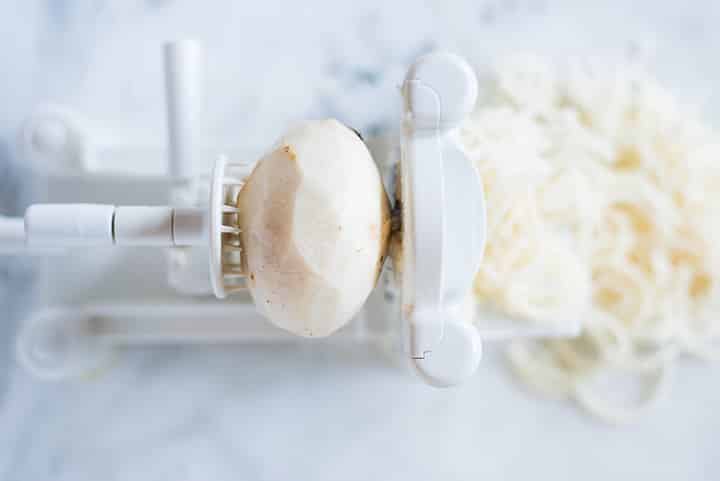 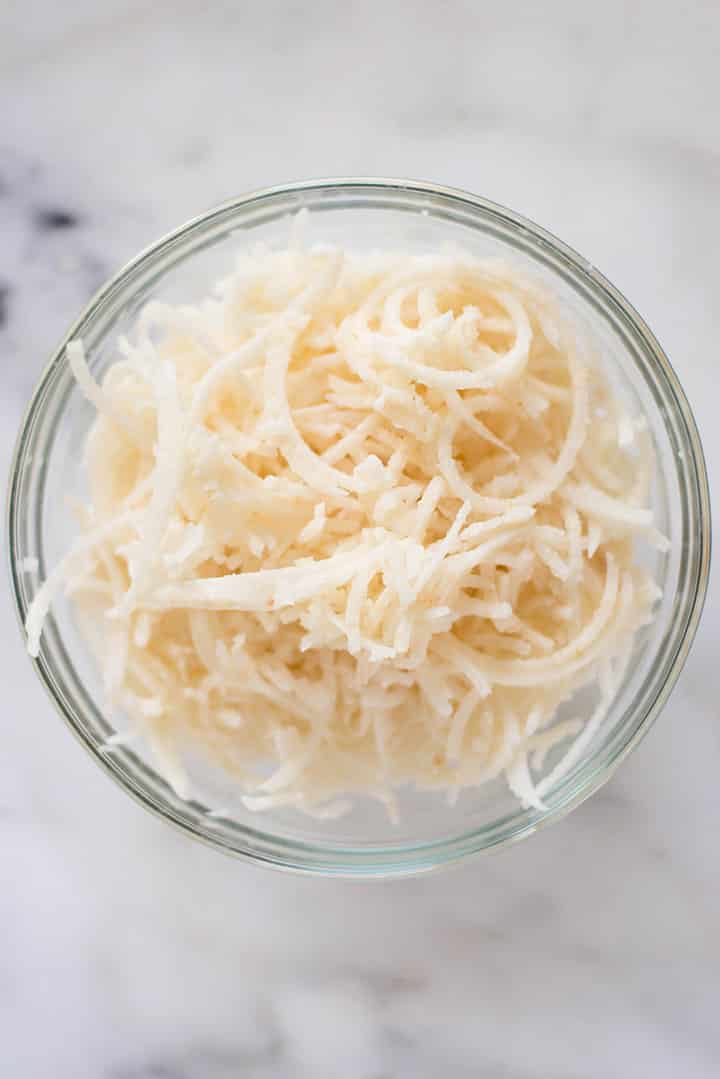 I love jicama in any form, especially when spiralized into jicama noodles.  Just remove the peel using a vegetable peeler and cut both ends flat.  Attach to the spiralizer and go.  Spiralized jicama can be used as a garnish or in a salad for extra flavor and texture.

Can You Spiralize Fruit?

Spiralizing isn’t just for veggies and squash.  You can also spirals firm fruits, like apples and pears.  Just make sure they are as firm as possible so they hold up when turned into noodles.  If they have a core, try to have it line up as best as you can with the center of the blade so it doesn’t get spiralized.

How To Spiralize Apple 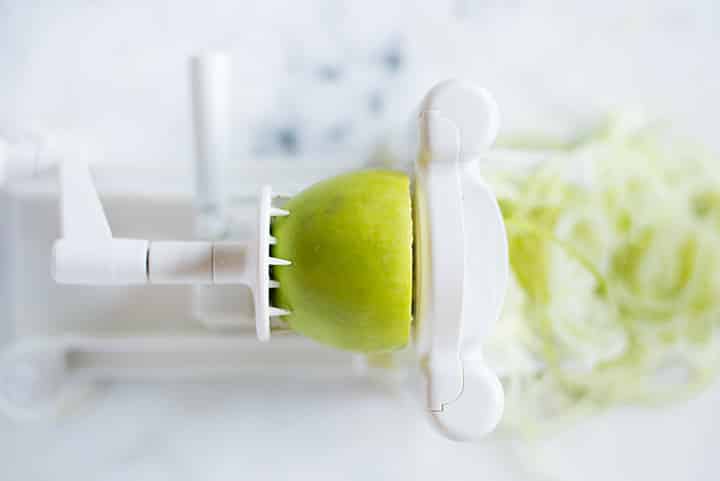 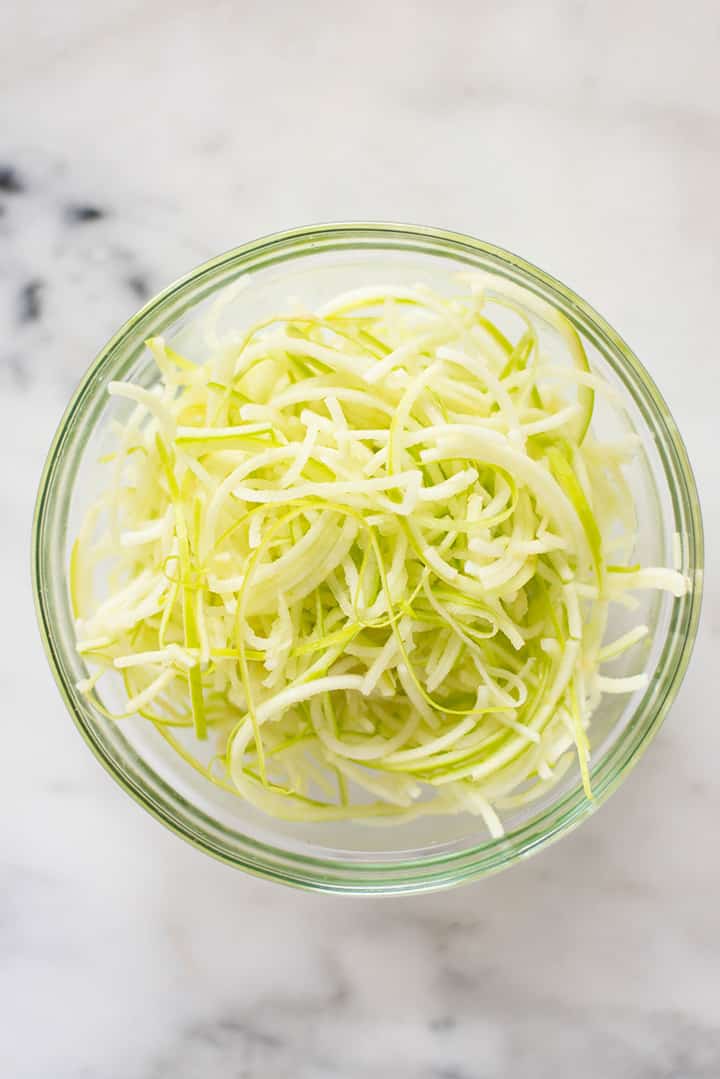 You can also spirals firm fruits, like apples and pears.  To spirals apples, make sure they are as firm as possible – granny smith apples work great.  Just remove the step and make the step side as flat as possible and then attach to the spiralizer step side facing toward the blade.

How To Spiralize Pear 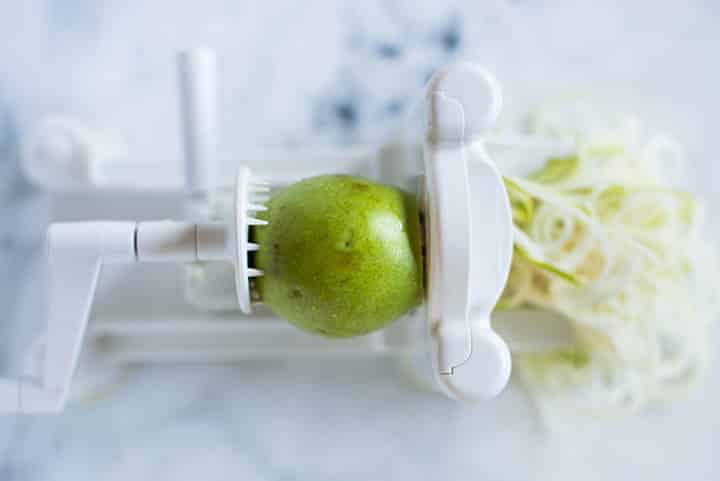 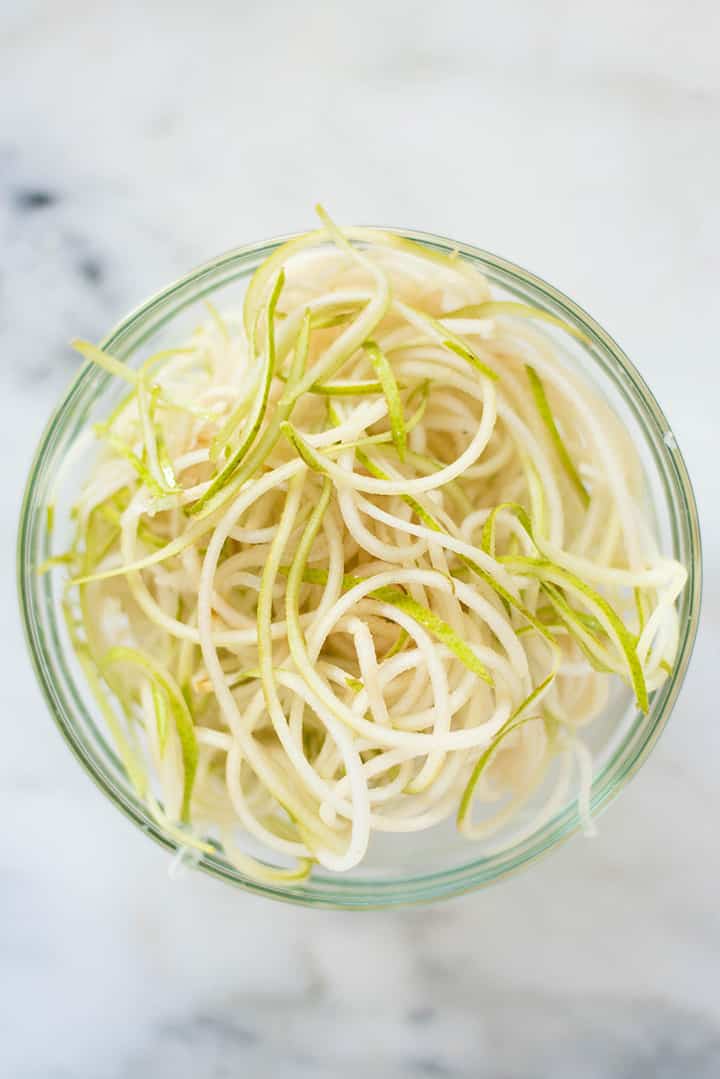 The same goes for firm pears when spiralizing fruit – try to align the core so it gets right to the middle and you don’t wind up grinding any of the seeds.  No need to remove the peel, either.  Saute spiralized pear noodles with a little coconut oil and cinnamon and you’ve got yourself a tasty sweet treat!

Can Spiralized Vegetables Be Frozen?

Many spiralized vegetables can easily be frozen and saved for later, which makes them a great grab and cook option when you’re out of fresh produce.  The best vegetables for freezing when spiralized are sweet potato, butternut squash, beet, carrot, and broccoli stems.  While zucchini and cucumber noodles can be frozen, they contain such a high amount of water that they break down when thawed.  When ready to cook, you can add directly to your pan and cook, covered, until thawed or allow to thaw overnight in the fridge.

Did I miss anything?  Share what veggies and/or fruits you love to spiralize in the comments!

This post contains affiliate inks for products I use regularly and highly recommend.