Life is better with apple cider donuts…especially when they’re made with healthy ingredients! This post shares how to make a clean and heavenly version of this classic fall dessert.

If you’re looking for a sweet treat that perfectly sums up everything awesome about fall desserts, look no further.

Imagine a cinnamon sugar crust, a moist and cakey center accompanied by the sweetness of apple in every bite.

It’s like having the best of an apple crumble, a moist muffin, and a crisp churro all in one bite. YUM.

This recipe is so easy and much faster to make than you might think. I’ve also swapped all the processed and unhealthy stuff for cleaner and equally flavorful alternatives.

Read on further for the easy recipe. You’ll soon be perfecting a heavenly treat you’ll absolutely fall for.

Why Are They Called Apple Cider Donuts?

They’re called apple cider donuts simply because they’re made with *drumroll* apple cider. In our recipe, we’ll be making an apple cider reduction and slowly stirring it into the donut batter. It’s super easy!

You can expect to taste the lovely apple flavor in these donuts that beautifully blend in with the fall spices.

What Are Apple Cider Donuts Made Of?

Although apple cider donuts are normally made with refined sugar, unhealthy oils (for frying recipes), and nutritionless all-purpose flour…here’s a breakdown of what you’ll need to #makeithealthy.

For the donuts, you’ll need:

For the topping: We’ll be using melted coconut oil, coconut sugar, and cinnamon.

Why Are Apple Cider Donuts So Good?

Apple cider donuts are so good because they are the epitome of all things wonderfully fall. They have that beautiful cinnamon sugar crust and a moist cakey center that pairs SO WELL with a hot cup of coffee (or healthy chai).

Let’s go further. An apple cider donut combines the sugary crunch and spice you usually get from apple crumble with the decadence of a pumpkin chocolate chip muffin.

…I must say that you might really only understand once you try them. Words cannot do these donuts justice, y’all!

Yes, they’re known to be a classic fall dessert. Many chains and bakeries have carried this seasonal treat through the years. It actually entered the mainstream food industry in the 1950s!

Yes, you’ll be able to taste the apple flavor in these donuts. It has something to do with smell, too (these senses are related). While baking this treat, your kitchen is going to smell like a bakery filled with apple, nutmeg and cinnamon. Ahh.

To give you a better idea, here’s what you can look forward to experiencing with these apple cider donuts:

Texture: It’s cakey and moist on the inside with a nice, sugary crunch on the outside.

The typical recipe for apple cider donuts isn’t really healthy. Some of them may contain these ingredients:

So I’ve revamped our version to #makeithealthy and with CLEAN ingredients. Aside from swapping the unhealthy ingredients with cleaner versions, we’re also baking the donuts instead of frying them.

I LOVE eating donuts fresh, right after the topping has been sprinkled on. But if you have to store some leftovers, simply place them in a good air-tight container inside the fridge. They should last up for 2-3 days.

When reheating, I like putting them in the toaster oven to revive that nice outer crunch!

Looking for more fall dessert recipes? Check out some of my favorites: 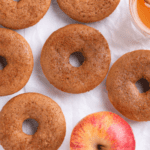 Imagine a cinnamon sugar crust, a moist and cakey center accompanied by the sweetness of apples in every bite.