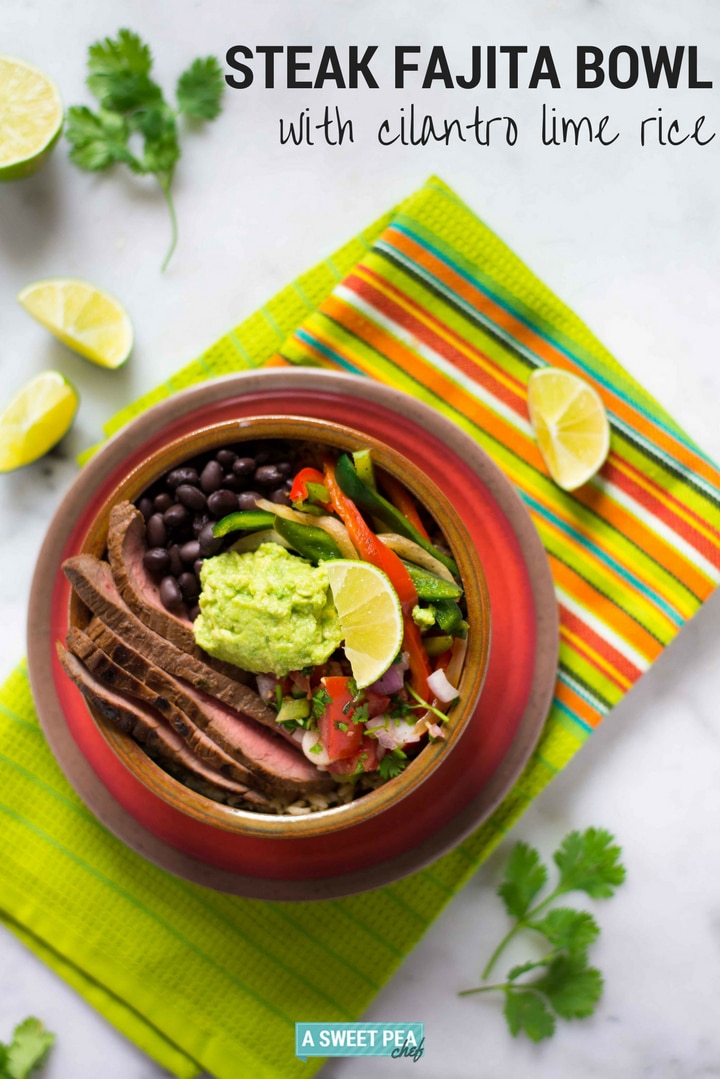 There’s all the different pieces…flavors, colors, temperatures, and textures.  Plus, if you order them at restaurants, they usually come on one of those sizzling plates and everyone stares over at you, longingly, dreaming of how tasty your food looks.

Luckily, it’s one of the meals Dustin and I equally enjoy — though our finished fajita looks quite different.  He goes for meat and cheese only on the tortilla, whereas I like to add a little bit of EVERYTHING to mine.  With all those tasty toppings, like pico de gallo, guacamole, and fajita bell peppers and onions, it’s hard not to.

When we aren’t ordering fajitas out at a restaurant, we also like to make this super yummy steak fajita bowl with cilantro lime rice at home.  And you know I gotta include all my toppings, too! 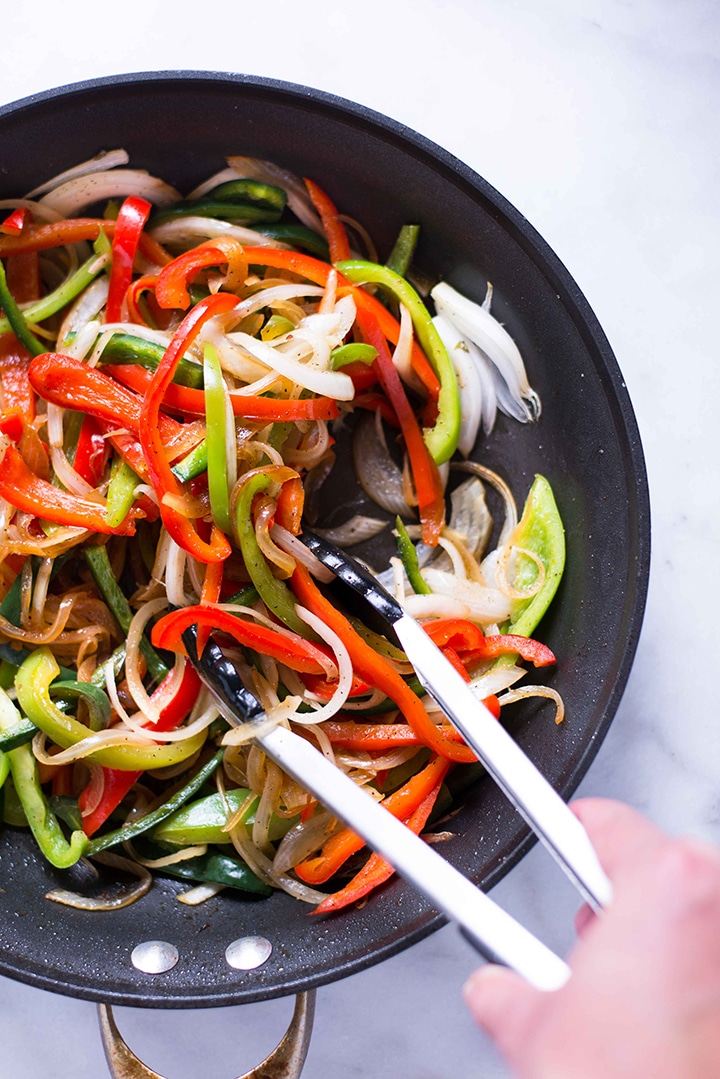 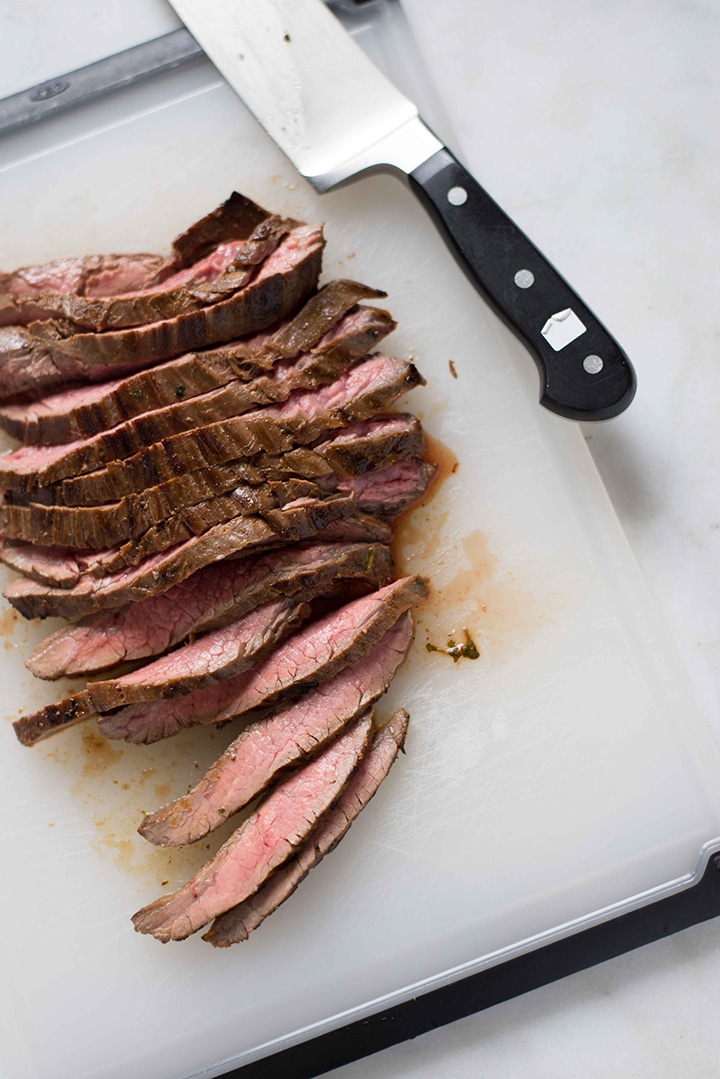 How to Cook Flank Steak

When cooking flank steak, there are three major tricks for the most tender, flavorful flank steak, which are…

When cooking flank steak in a pan, make sure to heat your pan over medium-high heat until it’s nice and hot.  Remove the flank steak from the marinade and allow most of the marinade to drip off, since we don’t want much liquid in the pan along with the meat (it ruins the searing process).  Let your steak sizzle and cook for 4-5 minutes without touching it for a medium steak (3-4 minutes for medium-rare).  Then, it should look nicely browned.  Flip your steak over and cook the other side the same way, removing from the heat and allowing the steak to rest for 5 minutes before slicing across the grain into thin slices.  Cooking flank steak beyond medium will increase the toughness of the steak, so I usually shoot for medium.

How to Marinate Flank Steak

Marinating flank steak is very helpful to making your flank steak be as tender and as flavorful as possible.  You typically want to marinate flank steak for a minimum of two hours, up to 1 day in the refrigerator.  This will allow the meat time to tenderize and to fully absorb the flavors from the marinade. Marinades usually consist of an acidic ingredient, like vinegar, lime juice, wine or yogurt, plus spices and an oil.  The acidic component softens the food as it marinates, allowing the meat to absorb the flavors of the sauce. Marinating longer than a day can actually cause the meat to become more tough, especially with highly acidic marinades.

Here are some quick tips on how to marinate flank steak: 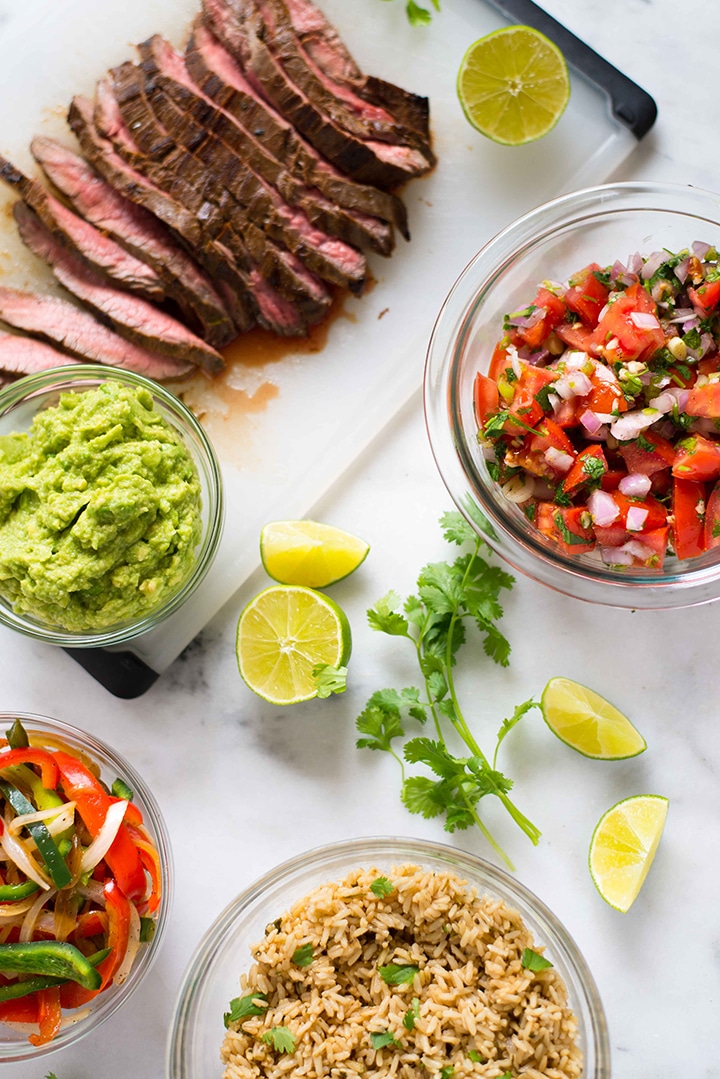 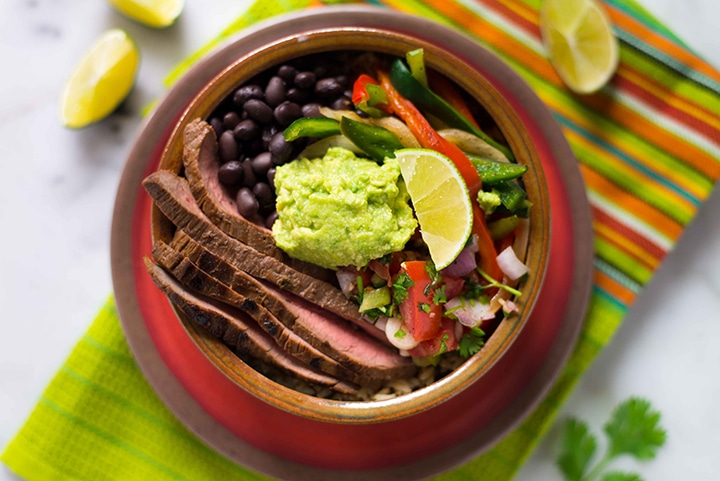 How to Make Cilantro Lime Rice

Making cilantro lime rice is so easy and adds so much flavor to regular ol’ rice for this steak fajita bowl.  I like using brown rice instead of white rice since it is less processed and has higher fiber and nutrients, but either rice will work.  In order to add the most flavor into the rice, instead of cooking it with water, use a combination of low sodium chicken broth and lime juice. While you could use a rice cooker, I cook it on the stove using either a deep stock pot or a deep sauce pan, depending on how much rice I’m making.  I actually don’t even own a rice cooker.

In general, you’ll want to have a 2:1 ratio of liquid to uncooked rice, meaning you’ll want double the amount of liquid to the rice.  Measure one half cup of uncooked rice per person and scale this ratio up or down depending on how much you’re making.  Once you have the rice, liquid, and a little salt in your pot, bring it to a boil, and then turn the heat all the way down and cover the pan tightly with a lid.  While the rice is cooking, try not to stir it or mess with it — just leave it covered until all the liquid is absorbed.

You’ll want to start checking the rice to see if all the liquid is absorbed around 16-18 minutes for white rice and 25-28 minutes for brown rice.  If you find that the rice is not quite cooked enough, you can add a little more liquid, if necessary.  Once the rice is completely cooked and ready to go, fluff it with a fork and toss in the freshly chopped cilantro.  You’ll want to add the cilantro right at the end so it maintains its flavor and color. 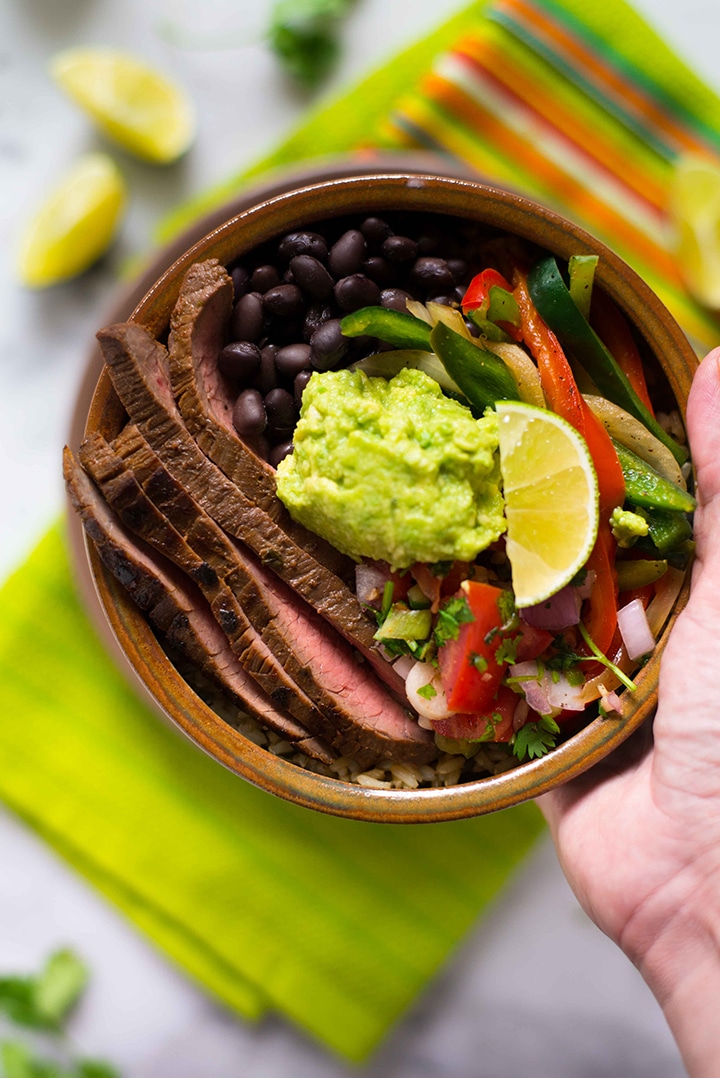 In case you were wondering, YES these marinated steak fajita bowls work perfectly for meal prep, too.  Just hold off on the guacamole and pico de gallo until after heating it up, if you can. I like to pack them in these meal prep containers or you could stack them in mason jars for an easy gran and go lunch or dinner.  Good stuff! 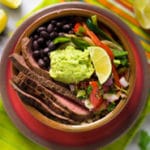