The other night my mother-in-law asked what I had planned for this week’s recipes.

I told her I made the BEST homemade Margherita Pizza and, not sure if she knew what it was, listed off the ingredients (essentially tomatoes, basil and mozzarella cheese). I also clarified it had nothing to do with a Mexican “margarita” cocktail.

My mother-in-law then asked, “Why is it called a Margherita Pizza?”

Good question! Here’s what I discovered:

In the 19th century, the King of Italy, and his wife, Queen Margherita di Savoia, noticed peasants in Naples eating a large flat bread covered with tomato paste and tomatoes.

The curious queen called for Chef Rafaelle, the most popular of the pizza chefs in Naples, and ordered him to prepare his specialties...

Her favorite? The one with mozzarella, basil, and tomatoes. Yup, the Margherita Pizza is named after a queen!

What’s The Difference Between A Margherita Pizza And A Regular Cheese Pizza?

A Margherita pizza is quite different from a regular cheese pizza because of the fresh ingredients. A cheese pizza includes cheese over the sauce and nothing else. But a Margherita pizza? You’re in for fresh and flavorful toppings like tomatoes, sliced mozzarella, basil, and extra virgin olive oil.

Is A Margherita Pizza Healthy?

Unlike other pizzas, a Margherita pizza can be considered healthy as long as you’re mindful of ingredients. Which, you know I’m all about!

My best homemade Margherita pizza recipe is fresh, light and its toppings only include basil, mozzarella, tomato and a tad of olive oil. In fact, a 4-ounce slice of a Margherita pizza made with whole-grain crust only has around 90 calories.

What Kind Of Tomato Sauce Is Best For This Pizza?

A simple tomato sauce makes for the best Margherita pizza (I’ve experimented quite bit to find the perfect flavor and texture). My go-to tomato sauce for this pizza, specifically, begins with whole peeled tomatoes. Not including juices.

Packed with natural flavor, this also gives you that fresh and light taste a Margherita pizza stands for. To get the smooth pizza sauce texture, I’ll run it through the food processor while adding some olive oil, oregano, dried basil, salt and pepper. Yum!

Which Mozzarella Is Best For This Pizza?

*Aim for medium to high quality cheese. Low quality mozzarellas works fine but could be a bit rubbery.

Is a Margherita Pizza Vegan?

If you make a Margherita pizza at home, you can easily make it vegan! Simply replace your cheese with a non-dairy substitute. There are so many vegan cheese options in the market now compared to several years ago. I personally like mozzarella cashew, but don’t hesitate to explore.

*If you’re in a restaurant, try inquiring about their vegan cheese options. It may feel unlikely now but if enough people ask...

How Do I Store My Pizza?

Pizza is best stored in the refrigerator in an airtight container. This keeps it dry – but not too dry – and it won’t get soggy. I know some people suggest wrapping the slices up in a bed of foil, but I noticed that it get too moist and tastes like fridge-burn (if that’s a thing!).

How To Reheat The Pizza To Keep It Crunchy?

The stovetop reheating method will get your pizza crunchy the next day. Never heard of it? It’s actually one of the quickest ways to mimic the hearty benefits of an oven without overdoing it. Here’s what you’ll do:

This technique will (mostly) recreate the crispiness you get from a freshly baked pizza.

If you would like to add more pizza options to your repertoire, here are some you’ll surely enjoy! 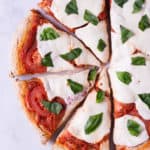 link to Do ACV Gummies Work?

Not everyone likes the taste of apple cider vinegar and may decide to try gummies. But do ACV gummies work just as good as ACV? In this post, I’ll explain why it’s best to take liquid apple cider...

Continue Reading
link to Which is Better: Protein Shake Before Or After Your Workout?

I get asked a lot about the best timing for when to have a protein shake - before or after your workout.  So, in this post, we’ll dive into what the research says, and I’ll share what I do...